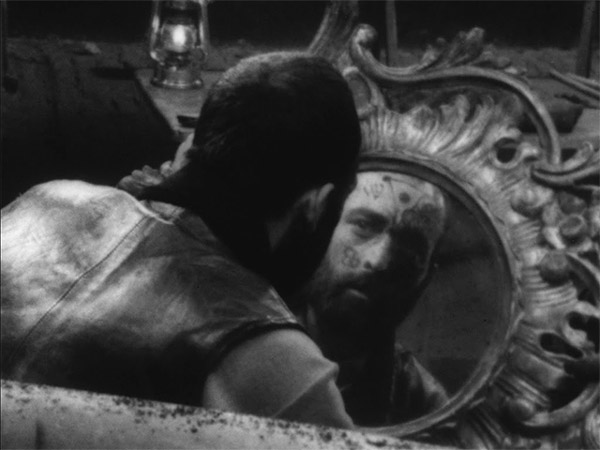 Thomas White’s 1966 film Who’s Crazy? is a joyful lark that brings together two great sets of improvisers: the incomparable Ornette Coleman with his trio and actors from The Living Theater , the free-wheeling pioneers of improvisational avant-garde theater. The film has not been seen in over 50 years since it debuted at Cannes and screened at the Cinémathèque Française. (Henri Langlois was a fan.)

The Living Theater crossed paths with White in Paris during a period of exile in which the theater’s founders and directors, Julian Beck and Judith Malina, were in prison in the US owing to a scuffle with the IRS. Leaderless for the moment, the company was on its way to a free place to crash in a Belgium farmhouse. White and his co-director Allan Zion (a partnership that did not last) went along, bringing their crew and a 30-page script which outlined a loose scenario: insane asylum inmates escape their confinement and occupy a Belgian farmhouse. From that simple premise, the actors proceed to dance, try on clothes, fry eggs, feed each other spaghetti, do weird breathing exercises and light things on fire. Their particular actions, obsessions and rituals gradually cohere to form an internal logic of glee and collectivity which invites us to ponder the question posed in the film’s title.

Ornette Coleman came into the picture slightly later, after an early version of the film screened to mixed reviews at Locarno (one critic suggested that the film should be thrown into the nearest lake) and the co-directors had parted ways. Coleman, together with David Izenzon (bass) and Charles Moffett (drums), recorded their soundtrack over a couple of days while the film was projected for them, and the finished film uses this recording almost entirely throughout. The result, which prioritizes physical action, slapstick and visual gags over dialogue, feels like a beat-era silent film with prodigious free jazz accompaniment, or maybe vice-versa. Who’s Crazy? was screened for Salvador Dalí in 1966 and his reaction was duly noted: “It’s almost Dalí.”

The film quickly fell into total obscurity. A London screening was cancelled because it “casts doubt upon the sanity of the police.” A 1967 letter from Louis Brigante at the Filmmaker’s Co-op suggests that the film would “do well in the college market” and considers pairing it with Shirley Clarke’s The Connection as a double feature. It never happened, though, and the film disappeared.

Since then, White has shuttled a large cardboard box containing the only existing 35mm print of the film between apartments and houses; it most recently settled in for a long wait in his Connecticut garage. The film was considered lost by the Library of Congress and the few jazz-on-film experts who’d heard of it. Last October, after Coleman’s death, I tracked down the director and, with Anthology archivist John Klacsmann, retrieved the battered print, complete with burned-in French subtitles from its Cannes debut. Klacsmann removed decades worth of accumulated dirt and splice-tape-melt and the film was digitized. Tonight’s screening will be its US premiere, and the film also shows Saturday and Sunady at 8:00 pm.