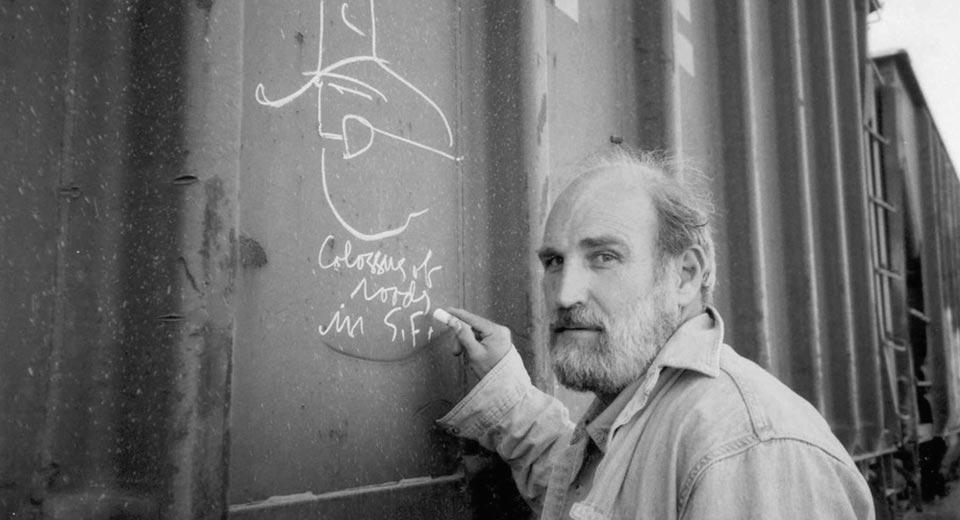 For sixteen years, artist/photographer Bill Daniel rode the rails in search of unknown folk heroes and outsider artists. The moniker Bozo Texino, scrawled under a simple oil pencil line drawing of a man in a cowboy hat, could be found on the sides of boxcars all over the country, traveling alongside physical cargo, historical memory, and the renegade tramps who have forsaken modern society and its trappings to live of their own accord.

Completed in 2005, Who is Bozo Texino? captures the subterranean network of hoboes and the shared language and myth-making of railroad graffiti. Experimental in form, and shot in black & white on 8mm and 16mm, the film sidesteps what easily could have been a voyeuristic glimpse of a community out-of-step with the world in favor of of surrendering to the mythologizing that is an intrinsic part of hobo culture. As a result it becomes part of the preservation efforts made by a new generation of train-travelers and rail artists to keep the century-old practice alive. It’s not much of a spoiler to reveal that the question raised by the film’s title is not answered in a satisfying way; once one is sucked into the testimonies and tall tales of the old generation of hoboes, it becomes clear the mystery is not the point.

The subculture Daniel depicts with such care and admiration was already almost-extinct at the time of the film’s production – it feels even more unreachable now. However, it’s impossible to take in the freedom and wanderlust displayed and not feel that every bit of it is still alive.