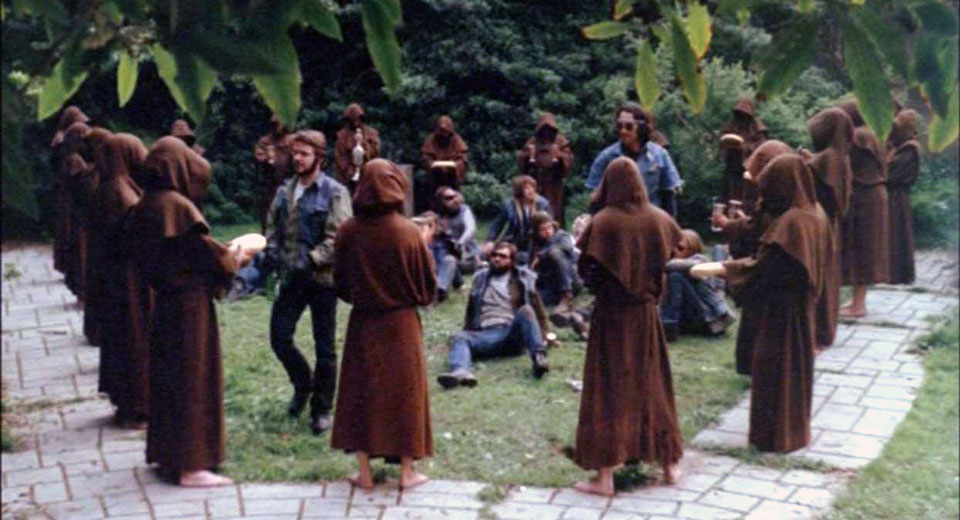 Michel Levesque’s 1971 Werewolves on Wheels really doesn’t need to be half as good as it is. The idea of werewolves riding motorcycles is worth the price of admission alone. I mean, imagine a leather-jacketed lycanthrope cutting off Dragula and flipping him the bird, blowing through a red light while chugging a beer, and howling all the way. I’m sold. What ultimately results from this potentially (very) silly (and very awesome) concept however, is a beautiful and, dare I say, restrained film that mixes magic, sex, and death into a heady draught from the Summer of Hate.

The bleak desert landscape sets the stage for this dread filled, post-Manson death trip when a group of bikers encounters a satanic cult. Sounds pretty crazy, right? It is and it isn’t. Werewolves starts with the usual imagery of leather-jacketed figures cruising down West Coast black top, goofing off and sticking it to the “man” with their unconventional hog-piloting. Standard stuff we’ve come to expect from the late 60s and early 70s biker movie. The soundtrack however, is the first hint that this isn’t the usual biker flick. The ethereal psychedelic rock that washes over the film’s introduction gives the gang’s ride a strange and otherworldly air. The scene feels like a moment somewhere out of time, the ghostly image of an endless somnambulistic ride.

Like most biker films, the group’s inner dynamic is the meat of the film along with typical oscillations between gleeful abandon and sudden violence. From the outset, the film hints at the animal nature already lying dormant in human beings — the gang’s leader is not the typically wizened rebel philosopher embodied by the likes of Peter Fonda, but instead a brutish pleasure seeker who is quick to anger. This animal nature is invoked in the flesh when the bikers come across a castle where robed figures are conducting a solemn ritual. Here Werewolves is like few other films, let alone biker films. The ritual the bikers encounter is a slow and hallucinatory affair filled with pagan dignity. The earlier ethereal score returns and the editing breaks from the standard narrative mode, giving form to a different, non-christian way of seeing and understanding. It is one of the most seriously considered and beautiful scenes of occult ritual this writer has ever seen on film.

Some dumb moves by the bikers result in a werewolf curse and from here the group slowly but surely becomes wolf-chow when the sun goes down. What makes Werewolves on Wheels such an impressive and unique affair is the seriousness with which it approaches its subject. This film does not wink but instead gives the viewer a poetic take on man’s animal nature, magic ritual being the bridge which unites flesh and essence in this case. The film seems to invite this type of deeper understanding through its Nietzschean structure. The bikers return to where they started and the ride continues in an endless return of the same, the gang seemingly condemned to ride as long as the beast lives within them.