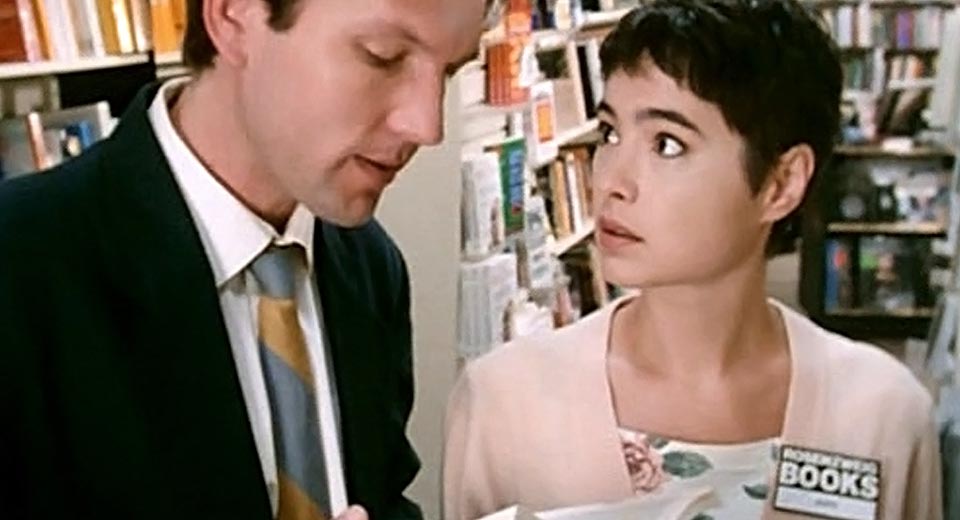 Sartre said existence precedes essence, therefore man is the author of his own actions, morals, beliefs. Hal Hartley’s cinema of inquiry flirts with existentialism by questioning aloud his characters and their aphoristic faiths. Concluding his 14-film retrospective today, Surviving Desire (1992) is a 53-minute arc of forbidden attraction between a self-serving literature professor, Jude (Martin Donovan), and his reciprocating object of desire, his pupil Sofie (Mary B. Ward). Although attracted to Jude, she’s more attracted to testing the affair through a Dostoevskian trial-and-error of morals, mirroring their class’s study of The Brothers Karamazov. “Faith comes after understanding,” we are told.

But we don’t understand Sofie’s interior priorities. We find her attractive for the same reasons lust-tortured Jude does, that we can’t get to know her except that she is an instrument of temptation, an icon of wanting more. Being human, we want to watch the sins and repercussions sure to come. “Shouldn’t knowledge provide solace?” Jude unironically asks Sofie, whose name derives from the Greek for knowing. But knowledge is the metaphorical man-behind-the-curtain representing anticlimax. It’s the illusion of the curtain parting that we desire, giving us power in imagining what we think should happen. Without knowing everything, we are able to creatively author; with more knowledge comes the responsibility of moral decisions. As Jude and Sofie imbibe in their feelings with deadpan candor, their romance dissolves into the disappointments of two individuals disillusioned by disconnection.

To maintain viewers’ speculations around morals, The Book of Life, Hartley’s 1998 lo-res video including a Yo La Tengo cameo as a Salvation Army Band, imagines Christ (Donovan again) in Manhattan with his cyberpunk Magdalena (PJ Harvey) to digitally cue the Y2K apocalypse. But Christ is over Christianity and working for his father, so he cancels the apocalypse, portrayed as a MacOS graphic file called “The Book of Life” sealed shut by seven CGI binder clips. “Every intimacy engenders expectation, and every expectation is some unknown disappointment,” warns Satan (Thomas Jay Ryan). In answer, Jesus has an existential crisis about how faith attempts to pacify needs. “Why were they comforted with dreams?” he deplores of mankind. Does your faith unaccountably comfort you, or do you require knowledge as solace from disappointment? Preceding today’s reigning social media, Hartley’s genius use of the Macintosh PowerBook symbolizes technology as gatekeeper to civilization’s future authorship. Without pun, Christ lastly laments, “I was the victim of my own history.”