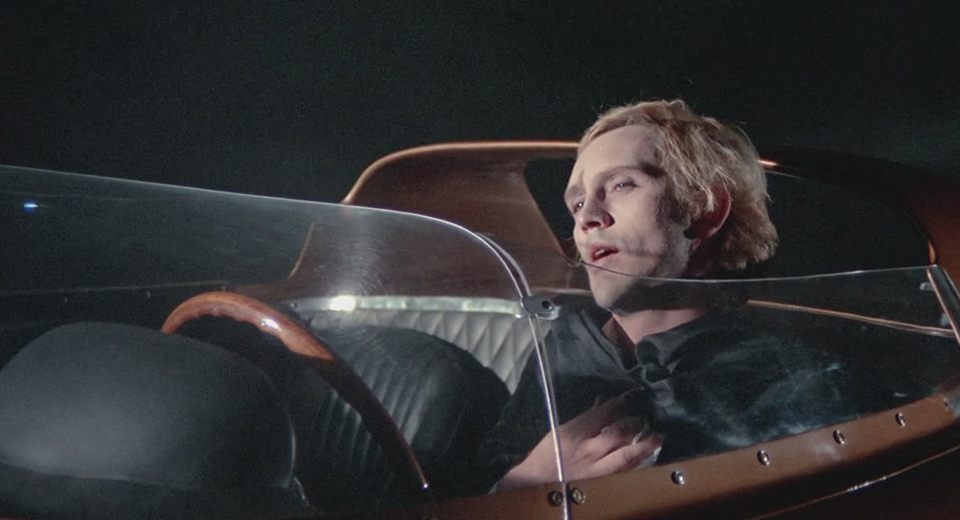 Critical consensus has it that Federico Fellini's contribution to the Edgar Allan Poe omnibus Spirits of the Dead (1968) is the only one of the three segments worthy of attention, and, surprisingly, critical consensus has it about right. Roger Vadim shrouds Jane Fonda and "Metzengerstein" in his patented faux- radical softcore chic, while Louis Malle's flavorless "William Wilson" manages to squander the seemingly limitless potential of sadistic twin Alain Delons. Fellini's "Toby Dammit,"however, shrinks and sharpens La Dolce Vita's cruise among the beautiful and their benefactors, and earns an unlikely position among the master's most visceral works.

Nominally an adaptation of Poe's "Never Bet the Devil Your Head," Fellini's segment features Terence Stamp as the eponymous Shakespearean actor who's just arrived in Rome to play Christ as a Marxist cowboy for a group of hound-faced Catholic producers. From the moment he steps off the plane his pallid face contorts in ceaseless agony as flashbulbs assault his stupor and a parade of Fellini grotesques (never more grotesque as they are here) grovel at his feet. He tells the bosses he doesn't believe in God, but knows the devil: a little girl in white silently teasing him with a bouncing ball.

For forty minutes Fellini slides Boschian creatures through his liquid frame while Stamp howls and cackles in desperation for another drink. Fellini presents a shockingly hateful phantasmagoria in the sharp glare of the spotlights his protagonist dreads. The entire film is unrelenting and suffocating, like an extended cut of 8 ½'s traffic scene with a bleach-blond Stamp in purple velvet pants standing in for Mastroianni's dapper filmmaker.

Fellini cuts together the elegant Rome of airports and award shows in an unreal contiguity with Stamp practically teleporting to each public appearance, shuffled forward by his handlers. When his deliverance arrives in the form of a Ferrari, real space intrudes as a knot of dead ends and winding stone roads. Finally, he sees the devil once more and chooses pursuit.