A Skin So Soft 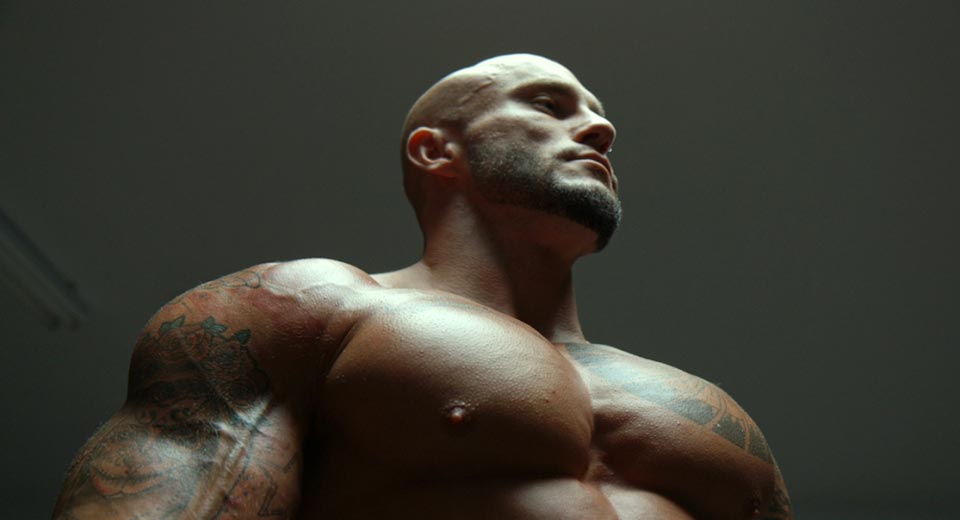 Denis Côté centers A Skin So Soft on the sound of heavy breathing. Throughout his study of five Québécois bodybuilders and one professional wrestler, he stages scenes conducive to silent contemplation: one of the men might sit alone in his darkened bedroom, staring out the window; another might be working out with dumbbells in a spartan basement, while the camera watches from a distance. Côté ratchets up the volume to give each breath a titanic force, reminding us of the labor required to both maintain and inhabit a built body. It is a solitary, all-consuming enterprise, one that can’t simply be shaken off and forgotten at the end of the day.

The film begins a weeklong premiere run tonight at Anthology Film Archives, with Côté in person for select Q&As. He has described it as a conscious aesthetic return to the poetic, observational mode of his earlier docs, Bestiaire and Joy of Man’s Desiring, after the lukewarm reception to his narrative Boris Without Béatrice, which also had its first run last fall at Anthology. As sort of an existential cousin to Pumping Iron, A Skin So Soft delivers spectacles—name another movie in recent memory that features a man strapped into a harness to drag the cabin of a semi across a parking lot—couched between Sisyphean training sequences and restless downtime. Although many episodes are scripted, Côté lets behavior take the mood in unexpected and occasionally haunting directions. An early scene in which one of the bodybuilders tears up while powering through forkfuls of breakfast courses with an ambiguous emotional energy. Is it the Sriracha on his avocados? The seemingly never-ending mountain of food? The YouTube video on his laptop, which we can’t hear or see? Or something else?

As the men navigate Côté’s often bizarre situations and settings, the mere sight of their bodies offers proof of their spiritual devotion to maximized physique: their aesthetic is their product. It’s a surprising, even bewildering, world to take in, but their commitment gives it clarity. It’s in their eyes in their loneliest moments, but it’s also a source of understanding when Côté sends the group on a utopian countryside retreat, an eccentric and tender exploration of community. A Skin So Soft maintains curiosity and levity as it investigates the bodybuilding lifestyle, but never scoffs at the depth of their passion.