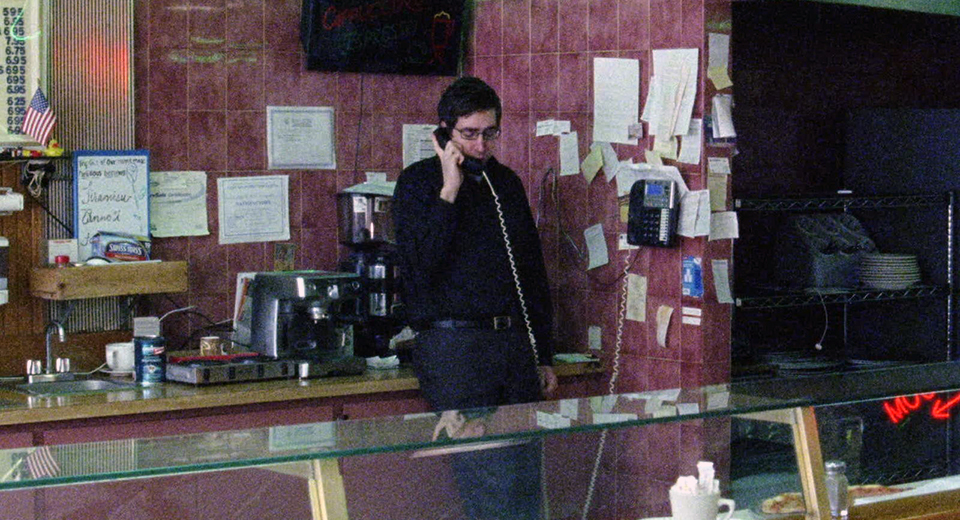 Ted Fendt’s cinema is one of transience, one comes to realize upon observing his work in full, an experience Anthology Film Archives is very smart to offer its audience during Short Stay ’s run. We catch a great amount of short glimpses of life: at parties, long walks, sit-down conversations, all of which relay the impression that we could be watching scenes set in different settings and not much would change. This isn’t to say that Short Stay or the accompanying shorts feel totally inconsequential or pointless, but that they acknowledge the slight tedium of quotidian existence. It helps that we follow an astonishingly passive human being as our protagonist throughout Short Stay (apparent Fendt regular Mike MacCherone, whose character shares his first name) to accentuate this underlying awareness towards life’s unremarkable-ness.

We witness Mike cycle through a number of odd jobs, ultimately landing at the position of taking over his friend Mark’s walking tours in Philly while he’s out of town. Mike’s not a very attentive person, as his butchery of the tour’s log lines and carelessness about personal hygiene and self-care evinces, but the strength of Fendt’s work is that he never attempts to psychoanalyze his characters’ behaviors, rather letting their actions speak for themselves, and even then, perhaps no insight is reached. His framing is spartan yet assured, never stepping over boundaries into needlessly complicated gestures or moments. Geographical specificity and consistency is another one of the pleasures of Fendt’s cinema; all of his films take place either in New Jersey, where the noted New York cinephile hails from, or Philadelphia, where most of the action seems to happen. Of course, these aren’t locales that have extensive representation in the majority of American cinema, so it’s refreshing simply on that level to see them so thoroughly lived-in here, but even more so, one should note the indifference with which this is approached: this is where these people live, and that is all. These brief sightings into the Fendt cinematic universe are a welcome respite from the self-important attention-seekers of current American Independent Cinema to my mind, and that a commitment to the celluloid format is inherent to Fendt’s filmography is an added bonus.