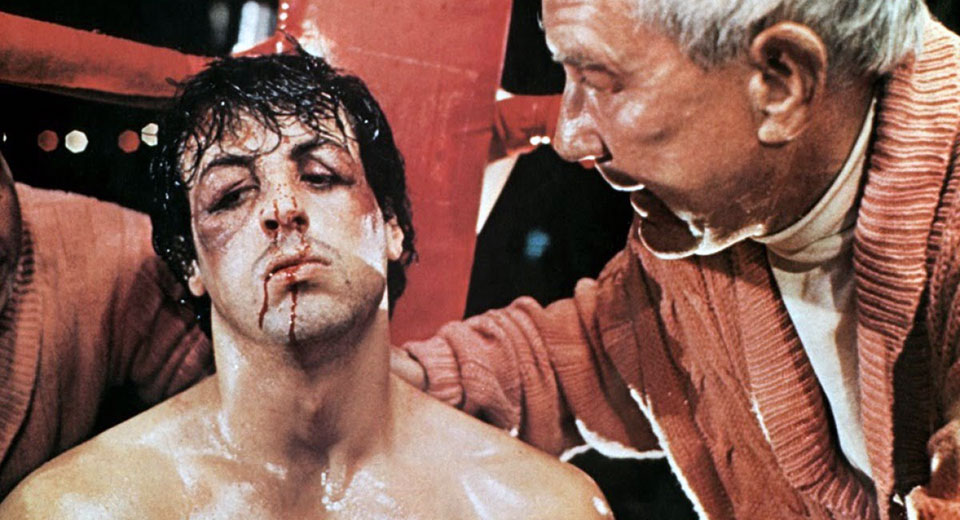 Rocky (1976) didn't become a classic by sitting on its ass, but by running through 28° weather in a floppy sweatsuit and Chuck Taylors. Its success was as hard-won as that of its author; according to director John G. Avildsen, Sylvester Stallone was "a starving actor who was going from the unknown to oblivion" at the time he wrote the screenplay in a Hail Mary attempt at late-bloomer success. Broke and pushing thirty, Stallone—as legend has it—wrote the script in one 20-hour sitting, basing it partly on his youth with his mother and pizzeria-owner stepfather in the suburbs of Philadelphia, partly on the 1975 Muhammad Ali vs. Chuck Wepner fight. The result is a colorful sketch of 1970s working class Philadelphia, a zealous celebration of America's founding myth, and an exercise in dramatic understatement.

It might seem preposterous to suggest that Rocky—the movie that invented the template for the zero-to-hero training montage—has anything to do with understatement, but having been familiar only with its most iconic moments from awards ceremony clip compilations and MGM's 90th anniversary DVD promo, it was much more modest than I expected. First of all, it's only got two fights; the opening scrap is over after a minute and even the climactic showdown is fast-forwarded with quick-succession cross-dissolves. Between these bookends, all we see is the daily struggles of Rocky and his friends. Rocky gets paid $40.55 for a fight after locker room fees and taxes, while Adrian (Talia Shire) gets bossed around at the pet supply store she works at. Her brother Paulie (Burt Young) wakes up before dawn to work in the freezers of Shamrock Meats Inc. and dreams of becoming a "legbreaker" like Rocky, who supplements his meagre income by threatening to break debtors' thumbs on behalf of neighborhood loanshark Mr. Gazzo (Joe Spinell). Down here at the bottom of the barrel, the televised exhortations of world heavyweight champion Apollo Creed (Carl Weathers) to stay in school—to "Be a thinker, not a stinker!"—sound like promises of an attainable future of self-reliance and dignity. America, as Creed reminds us, is a land of opportunity, which translates to something like "If you don't make it here, it's your own fault."

Since Stallone was able to pull himself up by his bootstraps—by writing a movie about a guy who pulls himself up by his bootstraps—he both proclaimed his belief in this worldview and demonstrated its viability. His legendary all-night scripting spurt is analogous to Rocky's five-week raw-eggs-and-4am-runs regimen, ascetic exercises without which their respective performers would have been doomed to scraping by in near-squalor. This identity of means and ends makes Rocky probably the most optimistically American movie ever, betraying not a trace of irony even in its images of a George Washington-costumed Apollo Creed being carried to the ring across a cardboard Delaware.

Rocky might be starry-eyed about the fair shake America gives to all its sons—both adopted and native—but it's also an exceptionally patient and loving portrait of a time and a place. The flannels, bomber jackets, and sideburns embody the 1970s as unmistakably as the zoom-pans and Bill Conti's funky score, and the stockyards and elevated train tracks conjure specific parts of Philadelphia as vividly as the pervasive cheesesteak signs evoke the cultural abstraction of the city as a whole.