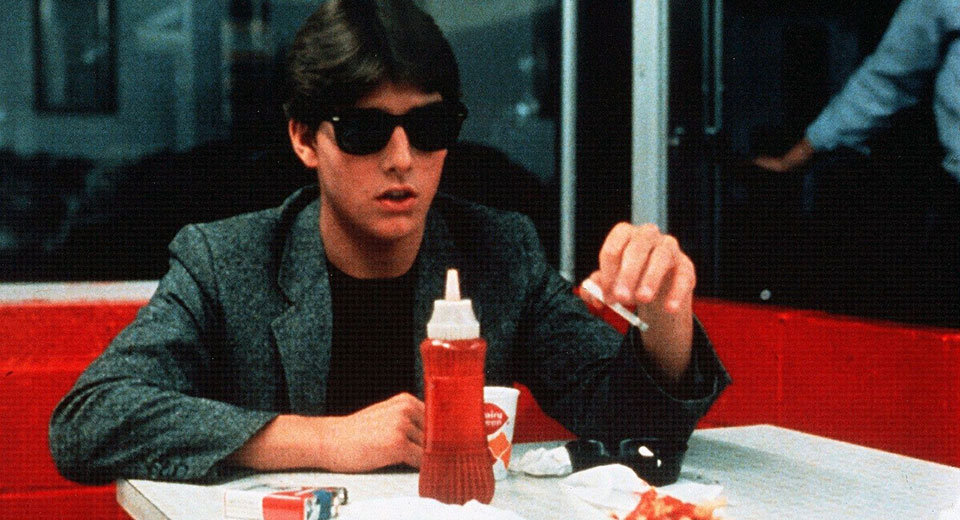 Tom Cruise is many things, but he’s never been cool. His best films (The Color of Money, War of the Worlds, Eyes Wide Shut) understand this and work around his toothy star persona, while his worst (the Mission: Impossible franchise, Days of Thunder, Top Gun) insist that he sits atop the summit of American boyhood. But he’s only ever been cool in the way that Eagle scouts are sometimes cool. He’s ravenous for merit badges (motorcycling, sprinting, piloting, breath-holding) and probably knows a lot of knots. In Risky Business , his first top-billed credit, this inherent squareness is the butt of the joke, even after he turns his suburban home into a brothel and rakes in a small fortune. The film’s poster showed him peering over his Ray-Bans while co-star Rebecca De Mornay writhed on a sports car underneath, neglecting the film’s satirical approach to a privileged teenage milqetoast’s foray into fast living.

Cruise plays Joel Goodson, a suburban high schooler of middling ambition and talent unlikely to follow his father’s footsteps to Princeton despite membership in the “Free Enterprisers” club. When his parents head out of town for a week, Joel allows himself to mess with dad’s hi-fi levels— yielding the endlessly parodied Bob Seger and tighty whities scene where Cruise buffoonishly plays air guitar— and helps himself to the liquor cabinet before preparing a TV dinner and doing his homework. A Harvard-bound friend (Curtis Armstrong) encourages him to say “fuck it” and get downright naughty by driving daddy’s Porsche and arranging a visit from a call girl. The escapade entangles him with Lana (De Mornay), who sees in Joel an opportunity to escape her pimp and momentarily enjoy the fineries of suburban living.

Soon after their meeting Joel pays the Lana the highest compliment he knows, calling her a natural “capitalist.” Bathing in the Reagan-era’s lust for consumer goods, the casual banter among all characters includes advertising catch-phrases and references to brand names. Lana and Joel make a mint brokering encounters between their friend groups (college-bound virgins and sex workers with “knowledge”) comibining her street savvy with his command of the Free Enterprisers curriculum. But Joel gets a taste of real capitalism when his earnings are swallowed up by figures more unscrupulous than himself. It was all the wet dream of a “nice kid” who is nonetheless bound to fail upward into six-figures and a McMansion. Deeply uncool.