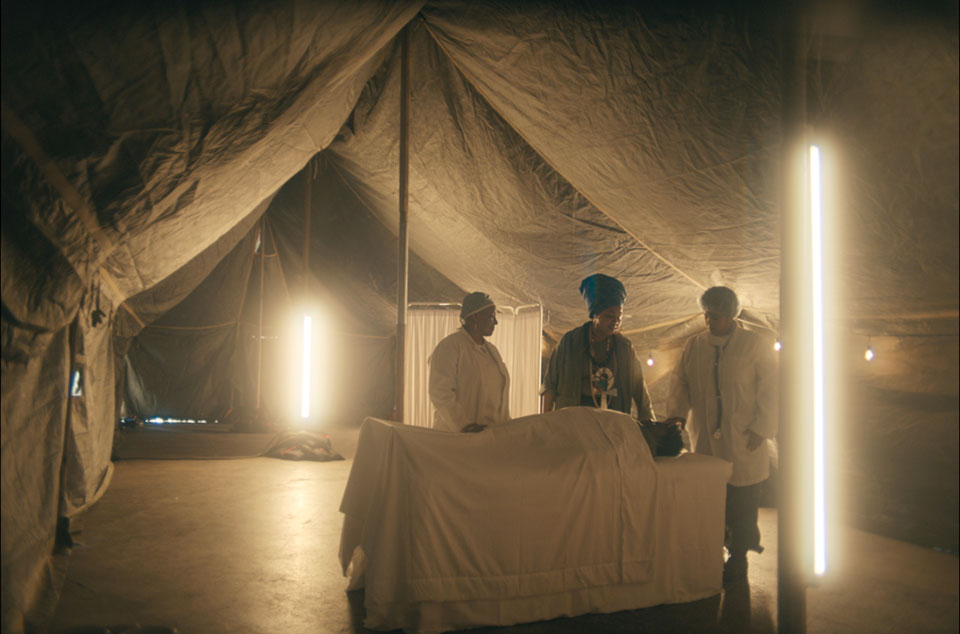 Right now in Chicago there are hundreds of nurses striking. The same nurses everyone was supposed to clap for as they made it home during a more sentimental phase of the pandemic. These are the heroes whose images are plastered everywhere next to thank yous and glib hosannas, and they are striking because they can’t provide adequate care to patients unless more nurses are hired. They are striking because they don’t have the proper equipment to protect them from a virus that’s still killing 1,000 each day in the richest country in the world. Nightly applause (which ended months ago) and free donuts won’t keep them from getting sick or their patients from getting sicker.

This is just one present-tense snapshot of only the most literal kind of care in the United States as we’re collectively engulfed by fire, flooding and well-earned despair. As the triumphant virtual exhibition “Radical Acts of Care” makes clear, care matters when it stems from an identification underwritten by sacrifice. Ultimately, that sacrifice is not an effacement of the self, but a communion between giver and receiver. Curated by Greg de Cuir Jr. and presented by Media City Film Festival’s Dark Dark Gallery through September 27, the seven-act multimedia survey presents work from the past five decades in which the political dimensions of care are made explicit. In each case, artists identify with life-and-death struggles in order to provide meaningful care. As de Cuir Jr. puts it in his prologue, the works capture “radical praxis, with care as a countermeasure and agent for social change.”

Madeline Anderson’s documentary I Am Somebody (1970) details a 1969 strike in which 14,000 marched and 1,000 were arrested in support of a living wage for a mostly female and entirely Black union of 450 nurses in Charleston, SC. She treats us to what has again become familiar footage: armed national guardsman buffoonishly sidestepping beside a peaceful march, cops manhandling protesters, white politicians denying the action has anything to do with civil rights and the raised fists and smiling faces of those morally compelled to fight for a dignified existence. As Coretta Scott King informs the strikers that Black women are the most discriminated against workers — an idea we’ve only begun grappling with 50 years later — Anderson cuts to a nurse in the audience with a tear in her eye and a devastating smile of relief, as though she’s hearing aloud for the first time a truth she’s known her entire life.

The strike continued for three months, drawing the attention and full-throated support of the AFL-CIO, local high school students, the broader African American community of Charleston and the SCLC. The nurses were ultimately victorious, winning a better wage and grievance process. Today a plaque commemorates their strength, situated a few miles from an aesthetically similar slab, shown by Anderson in the film’s opening minutes, valorizing the “the confederate defenders of Charleston.”

The role of white supporters in Black liberation struggles is the focus of Kelly Gallagher’s From Ally to Accomplice (2015). Combining landscape footage and animated collage, Gallagher charts the transition of the title, here embodied by two white American revolutionaries separated by a century, both forced to the conclusion that care for racial justice required the renunciation of their own lives and freedom. Brown’s story is well-known, one of the few righteous passages in most high school textbooks. If white America ever coughed up anything morally worthwhile, it was surely Brown’s raid on Harpers Ferry, in which he and a small band attempted to steal enough munitions to arm a slave revolt. Gallagher summons Brown’s ghost by layering vibrant, shifting colors over, through and under the endlessly reprinted paintings of his rebellion. She also visits a site in Iowa where his group stayed on their way toward infamy. Later in the film, Gallagher plays audio of the activist Marilyn Buck reading her poetry from prison, where she spent two decades for bombing government buildings and helping Assata Shakur escape her own incarceration.

Simone Leigh’s similarly playful Untitled (M*A*S*H*) (2018-19) combines music, particularly a stirring recital of Nina Simone’s “To Be Young, Gifted and Black,” choreography and secret histories to fashion a meditative recreation of the United Order of Tents, a 19th century society of Black women caregivers. In luminous black and white, Leigh captures a commune of care inside an enclosed warehouse. The utopian space provides a respite for the rejuvenation of several generations of Black women. The roles of caregivers and recipients blur until their shared humanity successfully beats back, if only in this unreal space, the oppression just outside the door.

It would take another essay to cover the richness of the exhibits other works, including the spellbinding documentary The House Is Black (1963) in which Iranian poet Forough Farrokhzad weaves intense footage of leprotic disfigurement into a celebratory plea for her society to integrate the infirmed. Cauleen Smith’s “Covid Manifesto” (2020) is a series of handwritten sticky notes with quotidian musings on why people drive like assholes on empty freeways and righteous declarations branding capitalism as the true life-devouring virus.

In this very moment, September 2020, believing that life on Earth can be any better is evidence of care in defiance of all evidence. But hope, as these works attest, has always demanded radical action to prevent its appropriation by the forces working hardest to strip it from us. Those who profit by denying care will never surrender their positions voluntarily. They must be fought and derided and made to feel shame. Radical care hasn’t changed since John Brown and the United Order of Tents. It still requires the assumption of grave risk. The needle has moved only a few degrees on abolition, dignified wages and access to medical care. In 2020, radical care looks like burning police stations and picket lines and the most hopeful, beautiful idea imaginable: masses of people in the streets advocating for their own dignity. That image echoes through each work in “Radical Acts of Care,” perfectly crystallizing each term in the title.