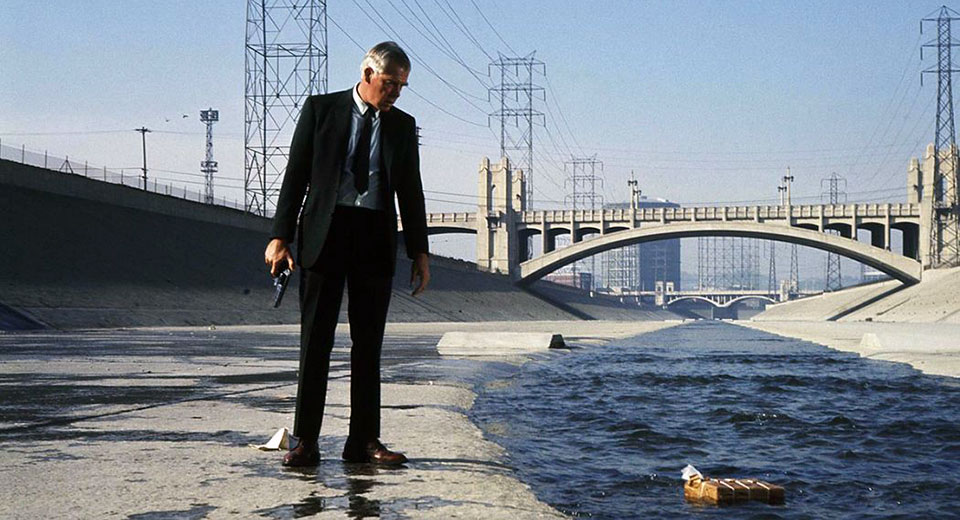 Point Blank opens with the gunshots of a double-double-cross. Honor-bound and seemingly indestructible Walker (Lee Marvin) meets a cocky old friend named Mal (John Vernon) at a reunion of some kind that probably isn’t tied to an institution of higher learning. Mal asks Walker to help him steal a large sum from his employer, “The Organization,” a massive gambling syndicate with its own office tower in downtown LA. They head to Alcatraz, where they intercept $186,000 during a scheduled hand-off in the deserted prison. Mal, in league with Walker’s wife Lynne, shoots Walker and leaves him for dead, taking Walker’s $93,000 share and Lynne with him. Not one to get discouraged by being shot and marooned on Alcatraz, Walker swims away and begins a protracted mission to recover his money and right wrongs.

Lynne’s sister Chris (Angie Dickinson) helps Walker, lending him her powers of persuasion as he starts with Mal and then works his way up the chain of authority in The Organization. Even so, women in Point Blank have a distinct set of mental paraphernalia and are ill-equipped to comprehend Walker’s hard-nosed underworld justice. After Lynne offers Walker a tuneless, fugue-like confessional, she offs herself with sleeping pills, saving Walker the trouble. (In Donald E. Westlake’s—aka Richard Stark’s—book The Hunter, upon which Point Blank is based, the sleeping pills are Walker’s own suggestion, and after Lynne dies he drags her body to Central Park and cuts off her face.) Angie Dickinson, the poor thing, is simultaneously trembling and emotionless and experiences very frequent costume changes. Point Blank’s women are simpletons at the same time that Walker’s worth as a man and professional outlaw are continually tested, yielding mixed results; he’s got a relentless drive and a vigorous problem with authority, but he’s also a tool, a rube, and a cuckold. Walker never actually kills; people plunge to their deaths somewhat by accident or are shot with bullets meant for him, so his vengeance remains unsatisfied. He shoots his pistol but his bullets are wasted on the ground.

Point Blank’s inventive, surreal, and nonlinear aspects are mesmerizing, complicating the film’s straightforward plot with unlikely detours and ellipses and adding enough subtextual dread to suggest that Walker could be dead or dreaming throughout the entire film. Lee Marvin’s impassive malaise and boyishly tousled hair (however white) are shot against variously monochromatic backgrounds of which other characters are frequently a part. It’s a film noir that is emphatically stylized and flamboyantly of the 60s, when reference to psychoanalysis and dreams had an exciting, insurrectionary flavor. Upon the film’s release in 1967, the New York Times cautioned that Point Blank was not appropriate for “youngsters”, “or anyone with delicate taste.”