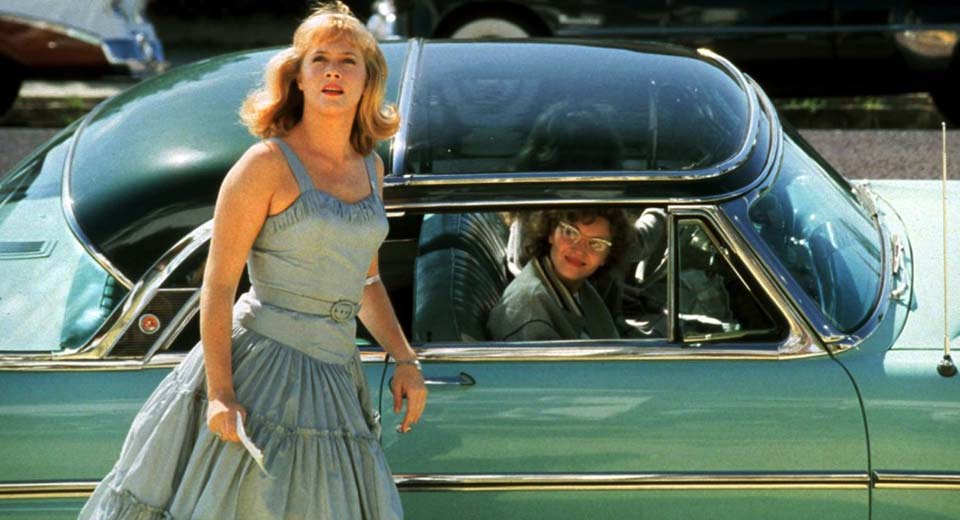 I don't know whether Come Back to the Five and Dime, Jimmy Dean, Jimmy Dean (1982) was an influence on Peggy Sue Got Married  (1986), but Francis Ford Coppola's teen comedy feels like a bubblier version of Robert Altman's minimalist psychodrama.

Both films revolve around reunions: Altman's around the 20th reunion of a James Dean fan club and Coppola's around the 25th of Buchanan High's class of 1960. Both transport us back to a time of pompadours, doo-wop and the turmoil of adolescent romance. But while Altman paints a portrait of psychological vulnerability on a par with A Woman Under the Influence, Coppola turns a woman's suspected insanity into a comedic set-up.

Peggy Sue (Kathleen Turner) faints at her high school reunion and wakes up in 1960. Her boyfriend and future ex-husband (Nicolas Cage) fronts a teen R&B group (which includes a crew-cutted Jim Carrey) and her little sister (a young Sofia Coppola) still has braces. Throwing social pressure to the wind, Peggy ditches the jocks to hang out with a bullied supernerd/future high-tech entrepreneur and a "commie beatnik" who smokes and reads Kerouac.

The comedic framework is provided by what James Gleick in Time Travel: A History calls "temporal dysphoria." She marvels at the decor, the outfits, and her dad's new Edsel Pacer: "It's so fifties!" According to Fredric Jameson, the first writer to name the 1950s as a distinct cultural phenomenon was Philip K. Dick in Time Out of Joint. The protagonist thinks he lives in a American small town in 1959, but it's actually decades later; the town and its inhabitants are an elaborate simulation to keep him comfortable. The book inspired The Truman Show (1998), with Jim Carrey cast as another all-American goody-two-shoes.

With a few tweaks, the schizophrenic premise of Peggy Sue Got Married could produce deep anxiety. If Peggy wasn't sent back to a time of innocence and promise but one of hardship (like time spent in prison or undergoing chemotherapy), it might feel less like an adventure and more like a punishment. And if we were unsure about her mental stability, her cryptic allusions to having "a lifetime of experience" and being "a walking anachronism" would register as the sad ravings of a delusional, not as winks at the audience. But with Buddy Holly, The Duprees, and Lloyd Price on the soundtrack and Nick Cage's blond pompadour, it is a piece of cheerful nostalgia.