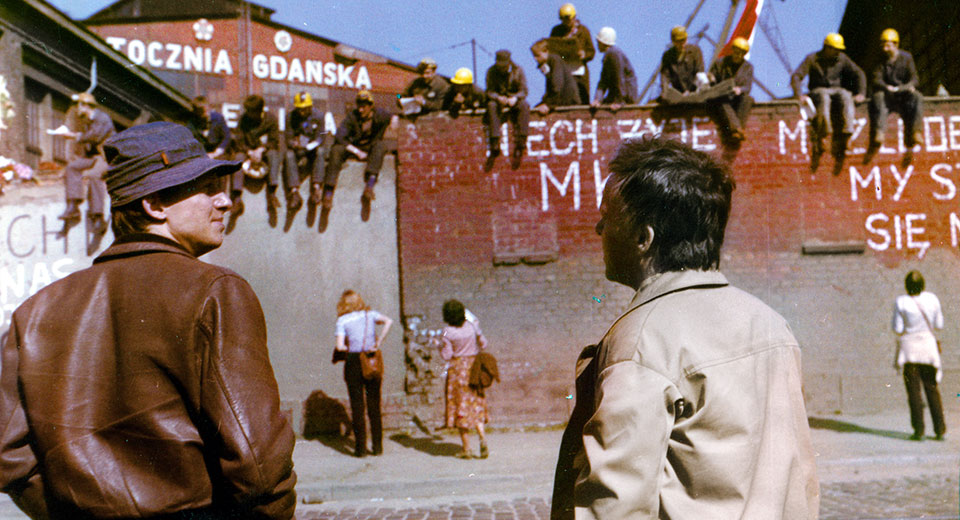 Riot police digging their knees into prone protesters’ backs, a procession of angry young men carrying a dead comrade to City Hall, the question “Is national unity to be imposed with police batons?” addressed to an investigating committee. Many of us see scenes of revolt and repression like these on the road ahead—and all around us already—but these ones are from Poland in 1970-1980, when shipyards, industrial plants, public transit systems, and many other sectors of the economy were repeatedly shut down in a decade-long wave of strikes. By the time Andrzej Wajda incorporated this archival footage into Man of Iron in 1981, these actions had led to the establishment of the country’s first independent labor unions since the beginning of the Communist period.

Through the intermediary of Winkel (Marian Opania), an alcoholic reporter who sweats and shakes his way through the narrative, we’re introduced to the young longshoreman Maciek Tomczyk (Jerzy Radziwilowicz). After his involvement in the massive student protests of 1968 and his father’s murder by police during a shipyard strike in 1970, Maciek took up the same line of work to finish what his father had started. For his political work, Maciek is now under attack by the police, who have compiled a rap sheet featuring assault and battery, currency dealing, “hooliganism,” and mental illness. (During this period in the Soviet Union, police commonly used psychiatry to delegitimize political opposition as “mental instability”—a tactic that also currently enjoys widespread application in the American media.) Wajda states in a disclaimer that although the characters are fictional, “the situations are real,” and the same could be said for the mentally ill of that period—the dissident psychos are figments of the authorities’ imaginations, but there is a real psychosis that permeates the entire society. As a psychiatrist in the film puts it to a patient, “Sick? No more than 30 million of our compatriots.”

This psychosis is the lie of a healthy Socialist society, propped up by what (in the context of the late Soviet Union) linguistic anthropologist Alexei Yurchak called the “hypernormalization” of authoritative discourse (also the broad subject of Adam Curtis’s recent film of the same name). Maciek’s martyred father (also played by Jerzy Radziwilowicz), who knows that the illusion of stability created by this official language and the violent authoritarian methods used to enforce it can not last forever, declares “No lie can hold up for long”—or, as James Baldwin once put it, "no kingdom can maintain itself by force alone.”

The docufiction character of Wajda’s film is felt most strongly in the false sightlines established between characters and secretly filmed police in footage from years earlier and in the numerous appearances of former Solidarity leader and Polish president Lech Wałęsa, who joins clergy in a public prayer for the strikers and blesses the protagonist’s wedding.