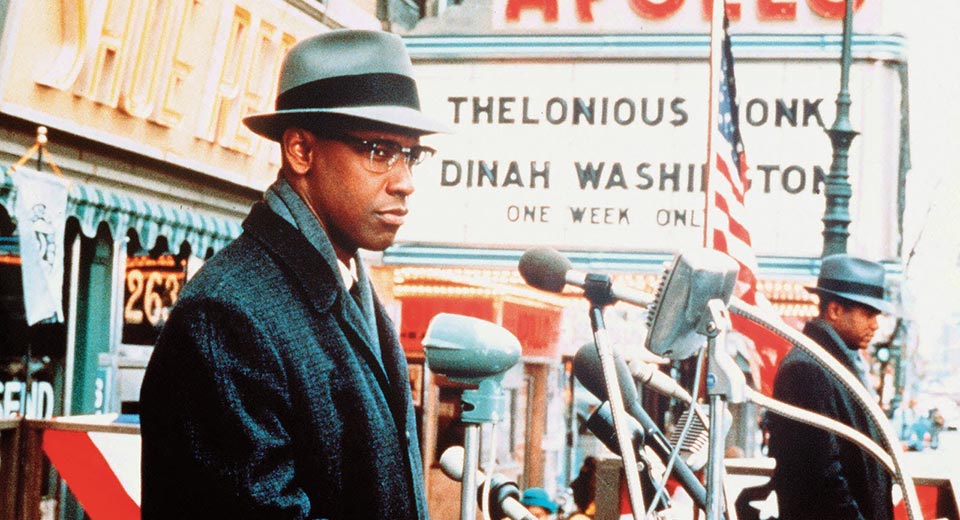 Genre-wise, the biopic is a cruel gamble, tolerating few exceptions to an apparent long-standing rule: you can't fill the audience's heads with too many facts they don't already know. Given our ongoing typhoon of supposedly conscientious biopics—Diana, Mandela, Cesar Chavez, 42, etc—that feel closer to sizzle reels of history for the library-lazy than they do actual films, do yourself a favor and go see the 35mm print of Malcolm X screening today at BAMcinématek . In hindsight, the film cannot help but look less like the disappointing slab of overpriced Oscar bait suggested by its detractors upon release, and more like it hit me as a white, suburban and deeply ignorant teenager: a history lesson as a gift. Epic and yet intimate, exhilarating and yet tragic, delivered with Spike Lee's customary mix of fire, brimstone, and joyful formal pizzazz, there's no question in my mind that a major American studio will ever again finance a depiction of history with so much skin in the game. But this is a very long way of saying: don't be scared into thinking X doesn't look and feel like a legitimately entertaining movie.

This is Spike Lee's Lawrence of Arabia, a sprawling historical epic marinated in decidedly filmic sensations, from cinematographer Ernest Dickerson's moonlit remix of E.T. with Klansmen on horses attacking Malcolm's childhood home to a candy-colored lindy-hopping 1940s Boston ballroom, to Malcolm's pivotal journey into Mecca, scored to Duke Ellington's "Arabesque." The film dishes out so many historic details and cultural comments from one scene to the next, it comes off as downright bellicose—but hey, this was the grandest platform yet (or since) for Lee, an unapologetic artist who works in constant peril of being misunderstood, curtailed or ignored. (The film opens with George Holliday's footage of the Rodney King beating intercut with an American flag on fire, further imprecations impossible to envision getting past first base in the 2014 edition of Hollywood.) The glee with which information is dispensed is obvious—like a swingin' live performance of Junior Walker's "Shotgun", intercut with Nation of Islam foot soldiers cocking their pistols in some shadowy warehouse, pausing only for one of the white FBI agents wiretapping X to offhandedly comment: "Compared to King, this guy's a monk!"

With screenwriter Arnold Perl, Lee makes a point of adapting X's autobiography, anchoring the screenplay from start to finish to his field of vision – which means we see Malcolm grow from a meek adolescent to a swaggering mobster to a borderline-brainwashed zealot for Elijah Muhammad, and ultimately into something entirely else, the potential of which is extinguished before it can take flight. As ringleader and dramatist, Lee bends his tempo accordingly for the film's variance of movements, but the whole endeavor would crumble without a blistering lead performance from Denzel Washington. As an actor emulating X's clipped diction and bottomless well of anger, Washington is terrific; as the prism through which his epistemological growth and the audience's pass in parallel, he's essential. Armond White dinged Lee for making X "about the shock wave Malcolm X created in American society" but not the man himself – in effect, bypassing the film's implicit black audience – and he was right by half, but this criticism simply negates Washington's contribution to the film, whereas for me Washington's contribution is the film. Lee neither downplays nor aggrandizes any phase of his antihero's development: right or wrong, the human jumble of all these experiences adds up to somebody we call Malcolm X.