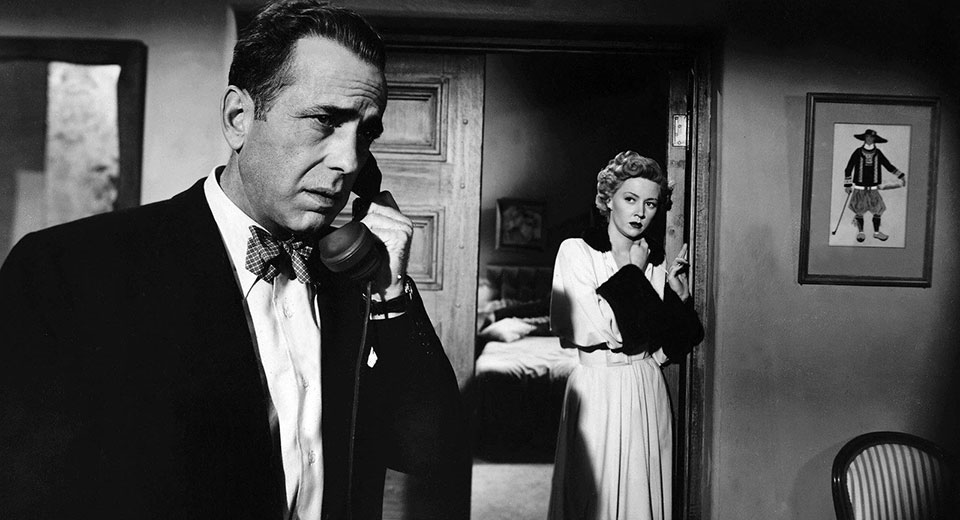 Liberties are taken in Nicholas Ray’s adaptation of Dorothy Hughes’ In a Lonely Place, but given the source material’s hard-boiled temperature one must excuse a little softening around the edges. Where novel strong arms readers into sitting behind the cerebral steering wheel of a snobbish, homicidal WASP layabout, Ray’s tough-but-tender noir treats viewers to a ringside seat at screenwriter Dixon Steele’s emotional and romantic unraveling, played with great sensitivity by a just-shy-of-fifty Humphrey Bogart.

With funds and liquor bottles drying to a trickle, Steele’s purgatorial stint in the titular lonely place looks every bit the typical noir conceit – there is even a femme most fatale in the form of bungalow neighbor Laurel Grey, herself a Hollywood would-be with too much time on her hands. Armchair analysts ought to have a field day with Ray’s soon-to-be-ex wife Gloria Grahame in the part of Steele’s love interest and, to her credit, Grahame’s is among any actors’ finest mid-divorce performances. True to Hughes’ novel, Grey’s transformation from icy sidepiece to doting helpmate is whiplash-inducing, but the transition never rings hollow. Placating an embittered drunk with a hair-trigger temper is a tall task for any woman – just how much of her marital life Grahame brought to set every morning is anybody’s guess (and hardly mine to speculate upon).

In a Lonely Place screens in Film Forum's Bogart series July 17-20 and is streaming on Prime, Tubi, and Plex