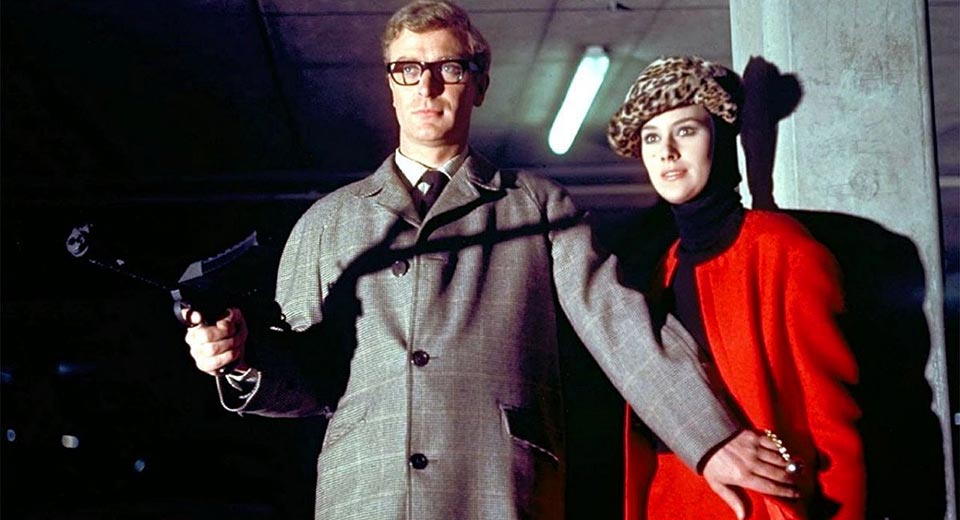 For me, watching Sidney J. Furie's adaptation of Len Deighton's The Ipcress File in high school was a revelation. Simultaneously downbeat and cheeky, Michael Caine's sour antihero Harry Palmer insults his way up and down the ladder of the British Ministry of Defense with the same marble-faced stoicism from picture's beginning to end. Whereas Bond has a relatively flesible work schedule and can take mutliple days to (expensively) acquire one piece of information, Palmer enters into a situation at M16 that's completely fluid. The London office illustrated here is dreary, uncaring and beseiged by infighting – in short, a portrait of the spies Bond leaves behind in the UK.

Alongside British films like Performance and If… — which were also unavailable on commercial VHS in the states at the time — Ipcress typifies the tension between commercial and art-house impulses driving the key players in British cinema by the sixties. Cinematographer Otto Heller designed the film in enveloping, skewed Techniscope angles that give impossible pictorial weight to tiny details like Caine's hands as he makes a seduction-omlette – a scene Caine says he had to fight to include. The Ipcress File does not achieve perfect harmony between its paperback prerogatives and its attempts to be opaque and quotidian, but that's hardly a mark against it – rather, a fascinating imbalance.

Given Deighton, and producer Harry Saltzman's curious passion towards making a counter-007, the film's actual politics are breathtaking in their bitterness. But Caine plays it so cool that his Palmer seems like he must be in denial – as of course is everybody but him. Caine also has claimed that Furie set the screenplay on fire in front of everybody on the first day of shooting, and the film was edited outside of the director's control, which piles further onto the mashing up of visual and cultural ideas that make its true authors Furie, Heller and Caine. But the foruth name on that list is probably John Barry, whose harpsichord-and-piano score, alternately wooing and clanging, willl haunt your dreams forever.