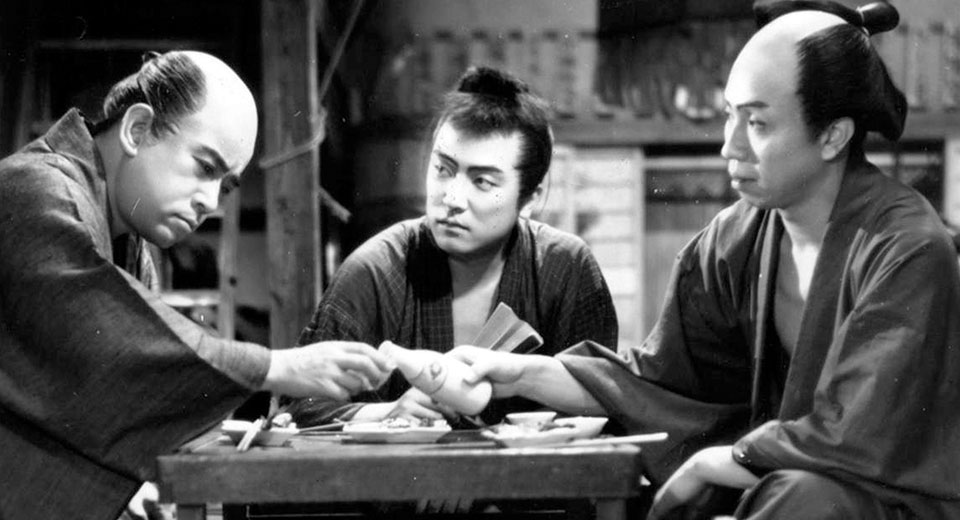 The death of Japanese director Sadao Yamanaka at the age of twenty-nine (due to dysentery a year after being drafted into the war and shipped off to Manchuria) is one of cinema’s supreme tragedies: an exceptional young artist snuffed out in his prime after significantly influencing his field with only a handful of works (not unlike Jean Vigo, who passed away at the same age). A prodigious talent who—with similarly left-leaning contemporaries like Hiroshi Inagaki and Mansaku Itami—transformed the traditional jidaigeki (period film) in the 1930s by prioritizing character over swordplay and commoners (ronin, merchants, thieves) over the higher ranks of society (samurai, daimyo), Yamanaka left behind twenty-six films in the six years he was active, only three of which have survived in full. Of these, his final film, Humanity and Paper Balloons (released in 1937 on the very day he was drafted), is widely considered one of the greatest Japanese films of the 1930s.

Adapted from a 19th century kabuki play, the film concerns the goings-ons of a tenement community tucked away in the shadow of the Tokugawa shogunate populated by gamblers, yakuza, and merchants whose daily misery is abated only by drinking and gossiping, typically during wakes for those who have taken their own lives. At the center of the film’s tragedy is Unno (Chojuro Kawarazaki) a soft-spoken, masterless samurai who hides his multiple failed attempts to find work from his wife as she continues to barely support both of them by making paper lanterns. When he unwittingly becomes involved in a crime carried out by his neighbor Shinza (Kanemon Nakamura), a gambler who suffers repeated humiliations from the hired thugs of a local pawn shop owner, Unno seals his fate.

While the central drama is quite affecting, due in no small part to some exceptional performances, Unno’s narrative is secondary to the incredible mood created by Yamanaka’s attention to realism and genuine depth of feeling for his entire cast of characters. There is a strong sense of a lived community, and Yamanaka excels at threading together multiple distinct characters as if they were his contemporary peers and not caricatures of a bygone era. In the context of the film series in which this film is being screened, “Shitamachi: Tales of Downtown Tokyo,” we discover that these characters are what define “Shitamachi”: brash, funny, and defiant working class folks who populate the cramped houses, bars, and back alleys apart from the powerful and elite.

To make the most of your viewing, follow up Humanity and Paper Balloons with Tadashi Imai’s StillI Live On, which series curator Aiko Masubuchi purposefully scheduled back-to-back (Masubuchi will also intro the 8:10 pm showing of the latter film). Imai’s film was strongly influenced by and hearkens back to Yamanaka’s masterpiece, even employing the same theater troupe Zenshin-za—it’s also incredibly rare!