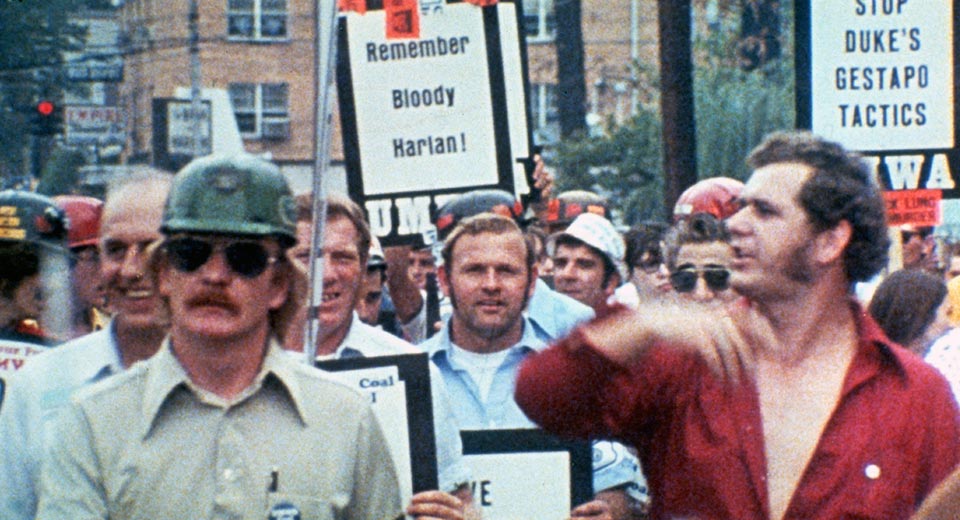 The striking miners in Barbara Kopple's 1976 direct cinema landmark Harlan County U.S.A. appeal to a higher authority than state law (represented by the sheriff and state troopers clearing roads for Eastover Mining Co.’s scab workers), namely the Constitution. But even though the miners keep asserting that they’re only demanding their constitutional rights, isn’t there more at stake than that? Could the Constitution with all its promises simply be a palatable way of framing the goals of their struggle for the rest of the people of Brookside, Kentucky? One of the dozen struggle songs heard on the film’s soundtrack appropriates the slogan “United we stand, divided we fall,” which, in the context of a workers’ struggle against their employers, takes on new meaning. The “we” no longer refers to a nation, to the mythical “People” of the United States of America, but to the proletariat (or at least to American miners as a collective). Is this an instance of the Brookside miners strategically adopting the language of American patriotism in order to appeal to their neighbors and to the rest of the country?

The appeal falls on deaf ears locally, as the scab leader declares any union activity rooted in Communism, carte-blanche justification for his and his men’s increasingly violent action against the picketers. So who are the miners appealing to?

One clue as to the collectivity they might have in mind is given in a scene in which a group of miners take a day trip to New York to picket outside the Stock Exchange. Wearing signs saying “Buying Duke Power stock is risky,” a dozen men in hardhats pace a twenty-foot stretch of Wall Street. One breaks away to talk to an NYPD cop tasked with keeping them in line. They compare the risks involved in their respective jobs, their wages, their health care benefits. The conversation is all the more striking due to the friendly, casual tone of the cop who interacts with the miner as an equal. Rather than seeing the police as their most immediate opponent, the miners see them as another group of exploited workers. But can the oft-repeated line of the classic struggle song, “Which side are you on?” be addressed to the police? Isn’t it always obvious which side they’re on? When have the police in America ever proclaimed their alliance with the social detritus they’ve been summoned to clean up and turned their guns on the exploiters, on the city government, or on their own superiors?

The stark contrast between the short-term and long-term goals of the struggle for the fundamental rights of organized labor becomes painfully clear at the funeral of the young miner Lawrence Jones. Fatally shot by a scab, Jones is hailed as a martyr by his comrades, who deliver a eulogy praising him for dying for their new, hard-won contract. The phrase “dying for a contract” captures the tragedy of this gradualist approach to revolution. In this fight to the death, these men stake their lives for a measly raise and benefits. In one of the didactic songs heard on the soundtrack, there’s a line that goes “We’re fighting for a contract / We’re fighting to be free.” Isn’t there an obvious aporia at the center of this couplet? A contract—by definition—is a legal bond. Not that freedom and commitments are mutually irreconcilable, but the kind of commitments that freedom is compatible with are bonds of friendship, not juridical ones. —Cosmo Bjorkenheim & Danielle Burgos