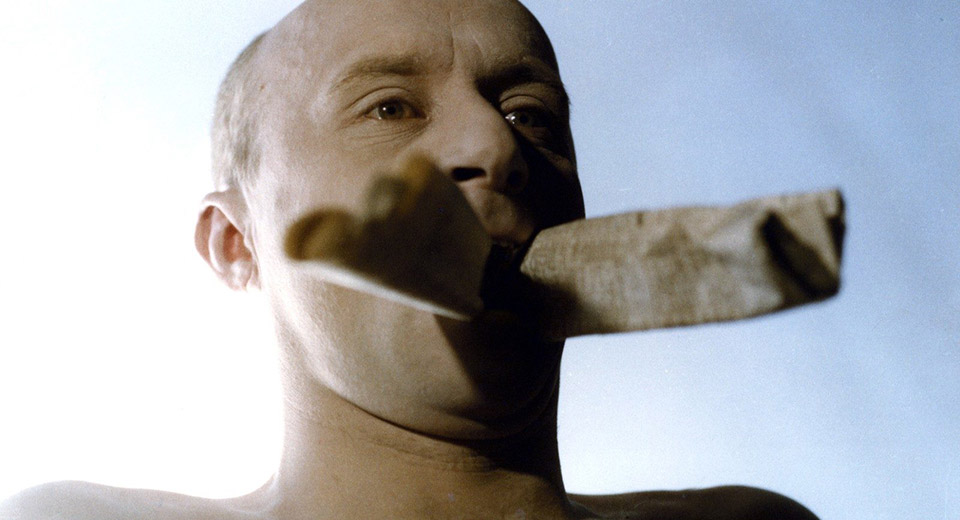 With their series “Sci-Fi Visionary: Piotr Szulkin,” Film at Lincoln Center offers a brief retrospective of a Polish master whose chilling forays into a totalitarian future remain instructive thirty years after the dissolution of the USSR. Szulkin’s 1980 debut, Golem, charted the stylistic and philosophical course he’d follow during a remarkable run of absurdist sci-fi (or as he preferred “asocial fiction”) nightmares released during the final decade of European communism. All of these works, plus his 2003 swan-song adaptation of Alfred Jarry’s Ubu Roi, are screening at FSLC in a three-day binge, and none are too be missed.

In post-apocalyptic Poland, a pair of scientists work to fashion the perfect citizen endowed with low intelligence and a pliable nature. One promising result is a series of men called Pernat (Marek Walczewski) a befuddled but earnest engraver. We meet the second iteration of Pernat

as he is released onto an abandoned city square with few memories and a small army of bureaucrats and scientists surreptitiously tracking his every move. Intercut with Pernat II’s misadventures are fuzzy television images of his creators alternately defending and forsaking their imperfect creation. Their man of the future is disposable, impressionable and easily confused. Szulkin wields his metaphors like a fire axe, swinging wildly at the Polish authorities’ stranglehold on the collective memory.

Scalded with harsh amber light, Szulkin’s desolate images capture the waking nightmare of a man lost within a facsimile of his own life. His every conversation is uncanny as he struggles to recall his name and recent history. Pernat is not the avenging or destructive golem of 19th century Jewish folklore. Like those mythical figures, he is brought to life from inanimate material in order to serve his creator. But his masters require no great feats from their subject. His purpose is to exist and to remain incurious.