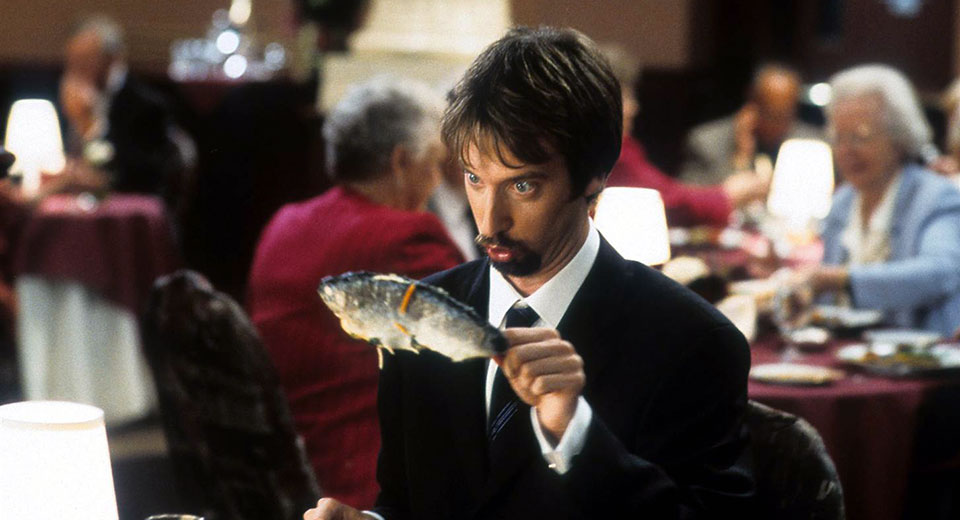 Tom Green's comic sensibilities came of age in idyllic Ottawa, Canada. He skateboarded and crank-called, did stand-up at Yuk Yuk's, performed in a novelty rap group called Organized Rhyme, and eventually hosted a bizarre public-access show called The Tom Green Show. Long before we met the Margeras, Green would routinely torment his parents on camera. His pranks had no punchlines. He'd botch skateboard tricks. He rose to local class clown notoriety, which snowballed into broader tape-trading cult status. In 1999, the show was repackaged and broadcasted on MTV, giving Green the unprecedented resources to pull larger, weirder stunts. He produced ambitious hour-long specials documenting his real-life operation for testicular cancer and the time he showed Monica Lewinsky around Ottawa.

Freddy Got Fingered , screening tonight at Alamo Drafthouse in 35mm, was Tom Green's directorial debut, an attempt to translate his renegade comedy into a proper 90 minute feature. To the layperson, it follows the form of the petulant man-boy flicks of Pauly Shore or Adam Sandler. Like them, Green is all id. He's ruled entirely by his desires and misunderstandings. But while Shore and Sandler are waif-like innocents, the classic vaudevillian schlemiels, Green is closer to Huysmans' Jean des Esseintes or von Trier's spassers. Tom Green is decadent. Tom Green is deviant. Tom Green knows comedy is not communication, but resistance.

Green plays Gordy, a basement-dwelling loser and aspiring animator. The movie is a dance between him and Rip Torn, as Gordy's tyrannical father. For Torn, it's a career-encapsulating performance that calls back to his manic roles in Coming Apart or Maidstone. The main thread is their power struggle: Torn wants Green to get a job and move out of the house. Green seems to want this too, but he's perpetually distracted by a well-endowed horse, nurse Betty (Marisa Coughlan), delivering a baby, and trying to get his animations noticed. The film is beautifully photographed by Cronenberg- and Craven-alumnus Mark Irwin, also the cinematographer of Green's screen debut Road Trip. It's an onslaught of demented set pieces, with a pace that has clear debts to Green's MTV roots.

Freddy Got Fingered was universally panned at its release, but has since been vindicated by its broad influence. Adult Swim would launch a few months after the film's release. Jackass, Andy Milonakis, Tim and Eric, and YouTube pranks would follow. Self-referencing, assaultive, and miscarrying comedy has held an increasing market share for the 18 to 34 failson demographic, but the main difference is that producers have rarely since repeated the mistake of trying to fit them into glossy studio comedies. In 1962, Manny Farber used the terms "white elephant art" and "termite art" to describe two tendencies in approaches to artwork—the bloated, controlled European masterpiece and the minor “suicidal improvisation.” He anticipates Tom Green, who incises the belly of the white elephant, wears it like a costume, strokes its phallus, and moves its jaws to make it "talk."