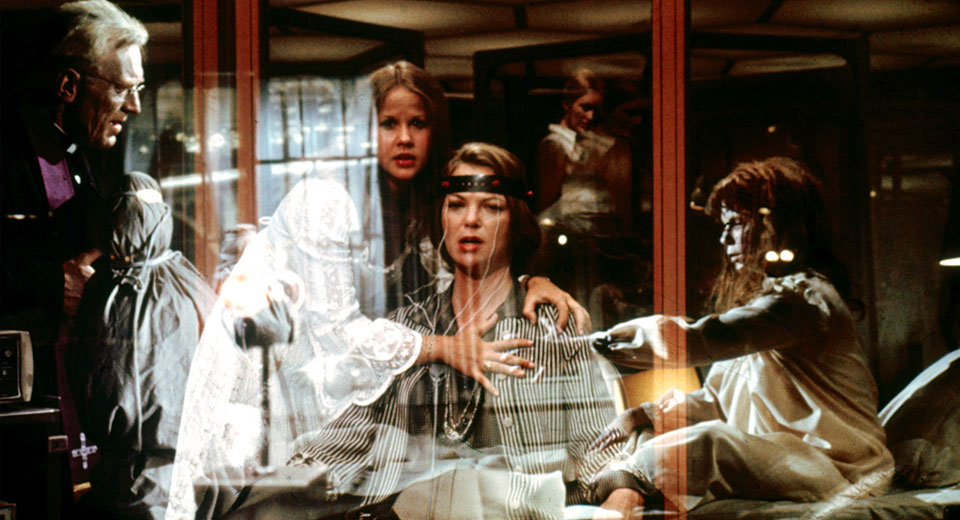 As sequel to The Exorcist, John Boorman’s The Exorcist II fails utterly to replicate any of the original film’s appeal. It succeeds on two fronts, however, one unintentional and one so earnest it hurts. Ultimately, the film is equal parts risible, camp colonial fantasy and phantasmagoric rendering of faith crisis. That these two successes are intertwined to the extent that separating them requires a substantial generosity is a shame.

Richard Burton plays the desperate Father Lamont, tasked with clearing the name of his mentor, Father Merrin, who has been accused posthumously of heresy for insisting on the physical reality of the devil while the church struggles to shed the occultism at its margins. His mission brings him to a children’s psychiatric hospital out of A Clockwork Orange, and the experimental therapies of Dr. Gene Tuskin (Louise Fletcher). The psychologist has been treating the subject of Merrin’s fateful exorcism, Regan MacNeil, who maintains few memories of the first film. Lamont, Tuskin and Macneil take turns seated before a shared hypnosis machine which psychically bonds participants within shared visions.

The visions take Lamont to a generically “tribal” section of Africa, the site of Merrin’s earliest battles with Pazuzu, the evil spirit who turned MacNeil into a puking head spinner in the previous film. There Lamont joins forces with James Earl Jones, a scientist intent on breeding the indiscriminate gluttony out of locusts. Jones was exorcised as a boy by Merrin, but has grown into an agnostic adult. As a representative of the Church, Lamont is horrified and invigorated by the reimagined rites of the turbaned and bare-breasted African converts. Amongst them he searches for his faith and the extent of Satan’s reach on Earth. Alas, the engagement with African Christianity shared by Lamont and the film is crassly self-serving and exploitative. Rarely has Hollywood employed so many magical negroes on-screen at once. Boorman deploys an entire tribe to recover the faith and good name of two European priests and the mental health of an American girl.

Boorman has made a career out of muddled metaphysical musings concerning savage Others. Here his curiosity and longing are on full display, but neither he nor the film can escape the shallows. Still, tracking a single locust on its flight above miniature sets and fearful humans remains one the most memorable images in a career best assessed as a gallery of sumptuous visions.