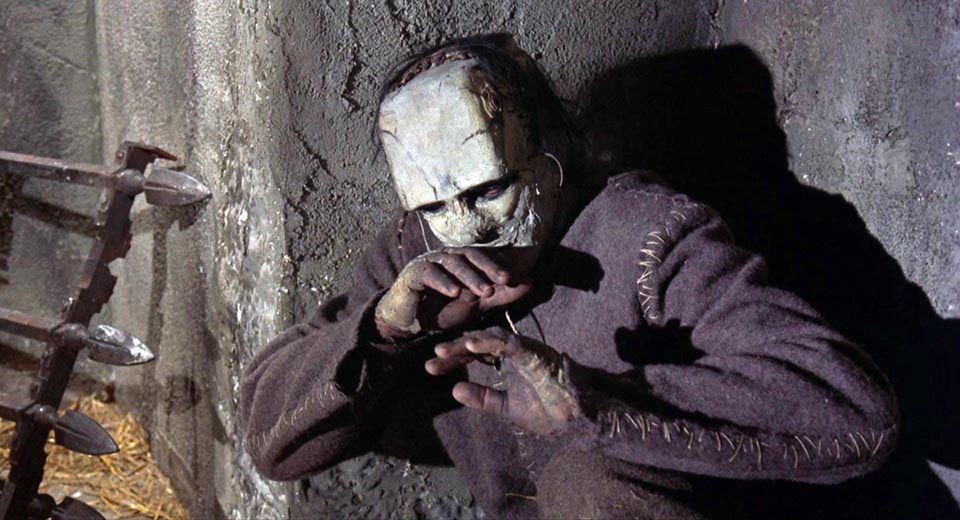 Filmmakers and audiences have long chided Dr. Frankenstein for his hubris while valorizing his presumed genius. He is always deeply, and sometimes warmly, human in his quest to create life, and we’re happy to extend to him what sympathy is left over from his doleful monster. Freddie Francis and Hammer films scrub all tragic sympathy from the scientist’s arc in the wonderfully repellent 1964 The Evil of Frankenstein, the third of six adaptations the studio produced with Peter Cushing as Frankenstein.

Cushing refreshingly plays the doctor as a sociopathic aristocrat, his hawkish face perfect for a self-appointed ubermensch venturing beyond good and evil. Exiled after events loosely based on James Whale’s original adaptation, Frankenstein has secreted away his experiments in a watermill full of bubbling tanks and sparking nodes. The lair is discovered, and he and his faithful assistant, Hans, must again outrun a horrified rabble. Destitute and desperate to continue his work, the Baron returns to his family chateau to sell what he can to fund his megalomania. In short order he discovers that his home has been ransacked by his persecutors, and his creation was perfectly preserved after falling into a glacier – anatomically functional, but dead-eyed. To re-reanimate his creature, the doctor enlists a similarly supercilious carnival hypnotist, Zoltan. The drunk carny and elegant gentleman clash over control of the monster, each man festering in his resentment toward a society unappreciative of his genius.

As much as audiences in 1931 found Boris Karloff’s monster viscerally repulsive before quickly warming to his innocence, the aesthetic shock of his boxy head and bolted neck has largely worn off, leaving only the profound sensitivity of the performance for modern audiences to appreciate. Francis’s monster, played by New Zealand wrestler Kiwi Kingston, remains repulsive five decades later. Some of this effect is a function of the relatively crude makeup. Straining credulity, a broad rectangular brow protrudes from his head above globs of pale clay along his cheeks. Like Frankenstein’s creation, the film’s monster makeup feels hastily, clandestinely assembled. The juxtaposition of artificial angularity and organic deformity on the creature’s face exemplifies the source material’s exploration of man’s paradoxical reach for deification through creation.