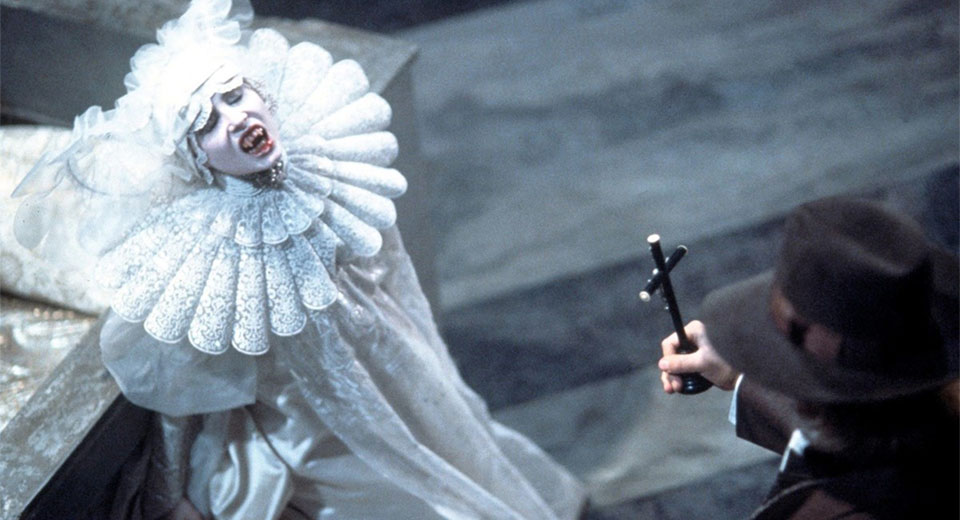 Is Bram Stoker’s Dracula (1992) the most gorgeous product ever to come out of Hollywood? Probably. Yes, definitely, if we arbitrarily limit our field to color films. (Otherwise, how could anything supersede Josef von Sternberg?) It’s a curiosity shop of disturbing gewgaws, crystallizing visually the symbiosis of existential threat and sensual allure that drive all vampire stories. It may also be Francis Ford Coppola’s greatest achievement, in which he diverts his overheated ambition from award-winning, lofty pontifications on America, War and Family, toward a heroic dose of visual splendor. Scopophilia in such generous portions is usually relegated to arthouses. Bram Stoker’s Dracula is every bit the equal of beatified sensual sensationalists Mario Bava and Seijun Suzuki.

Coppola and a visionary group of collaborators—cinematographer Michael Ballhaus and costume designer Eiko Ishioka chief among them—recreate Bram Stoker’s tale faithfully, but embellish it with lurid color, in-camera effects and a heavy fog of weird sex. They might have done well to jettison the source material’s epistolic format, but the bursts of diaristic voice over negate the need for visual exposition, freeing Coppola et al. to pursue only the most baroque flourishes.The film’s fin de siècle fetishism is pornographically manifest in the parodic Victorian performances of Winona Ryder and Keanu Reeves as well as in ravishing sequences such as a set-piece tour through early nickelodeons. Coppola reestablishes the dramatic stage’s influence on early cinema and the latter’s early situation alongside magic shows and other cheap attractions of modernity. He and his audience complicitly share the pursuit of thrills. Style this frenzied transmutes into a rich substance more engaging and life-affirming than allegorical crime fantasies or rambles of aggrandized war.

Mirroring Coppola’s maximalism is Gary Oldman’s performance as the Transylvanian count. After his beloved’s suicide in the 15th century, Count Dracula declares war on Christendom, vowing to survive death as a monster of vengeance. The rest of his arc is by now familiar, though it’s more vital here than it’s been since F.W. Murnau’s Nosferatu. Oldman oscillates between the count’s beguiling human form and the tragic demon wearing the centuries on his face. The stately, reformed madman behind Commissioner Gordon and Winston Churchill is here at the height of his manic power, as were many of his collaborators.