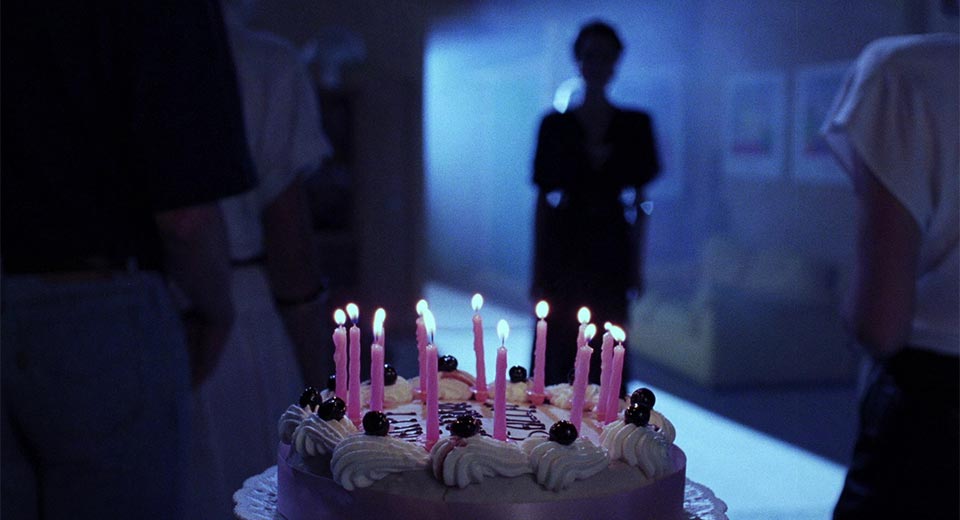 After a wonderful opening evening, The Medium is the Massacre continues today with the line-up of expanded cinema gore-a-thon Demons , its Ballardian, televisually attuned sequel Demons 2 , and Pulse , Kiyoshi Kurosawa’s terrifying portrait of what Marshall McLuhan called “Narcissus narcosis” in the internet age. As per the series M.O., each are paired with experimental film and artists videos that illuminate their subject matter.

In my first year as a film studies undergrad, I tried to argue to the prestigious Italian film scholar Marcia Landy that Demons was an incomprehensible mess, and she taught me the key formative lesson to lighten the fuck up (probably more or less her exact words) and enjoy it. As an adult with a somewhat more mature perspective, I now must agree that this ultraviolent head-to-tail gorefest packed with indelible moments like a guy riding a motorcycle around a packed movie theater swinging a sword at demons while a helicopter falls through the ceiling with hair metal blasting on the soundtrack is probably one of the finest works of surrealist cinema. Demons is preceded by Peter Tscherkassky’s multivalent masterwork Outer Space , appropriated from a movie in which a woman is attacked by an invisible alien and now is victim to the violence the film frame, and Takeshi Murata’s Untitled (Silver) , a major work of the “data moshing” style Murata pioneered in which Barbara Steele navigates an eerie mist of digital glitch—appropriated from Black Sunday, by Demons director Lamberto Bava’s father Mario Bava.

The narratively standalone sequel is less often screened, but arguably the more fascinating of the two within the perspective of a McLuhan-inspired series. Also taking cues from J.G. Ballard’s High Rise and David Cronenberg’s Shivers, it’s sort of the Grand Hotel of gory Grand Guignol: a television broadcast of a film that appears to be more or less a sequel to the one playing in the cinema of the first Demons movie unleashes the titled horde of the high-tech development. The contrast of media is inherently McLuhanesque, particularly in light of remarks contrasting television and cinema. For instance, in 1965, McLuhan wrote, “TV has processed the old movie into a widely heralded avant-garde form. The movie is no longer an environmental form. It is the ‘content’ of TV. Thus it has become a harmless consumer commodity that is no longer regarded as corrupt or degrading.” Demons 2 gets this, and is a violent (and frequently hilarious) rebuke to television’s quaint commodification and marginalization of cinema’s capacity to corrupt and degrade; likewise, it expands the sphere of its mayhem to include the complex’s fitness center, its parking garage, and other symbols of status and consumption dissected by McLuhan in books like The Mechanical Bride. It’s paired with Tommy Turner’s Simonland —a must-see work of transgressive independent cinema about a grotesque television demagogue—which we just recently preserved via my day job at EAI with Fales, BB Optics, and Colorlab, making today the premiere of the new 16mm print.

As a special bonus, today we’ll be joined by Demons 2 star Coralina Cataldi-Tassoni, whom viewers will have the distinct pleasure of watching massacre a room full of yuppies listening to The Smiths’s “Panic.” We’ll do a short intro and have a discussion following the screening. Tommy Turner will be in attendance for the November 4 screening.