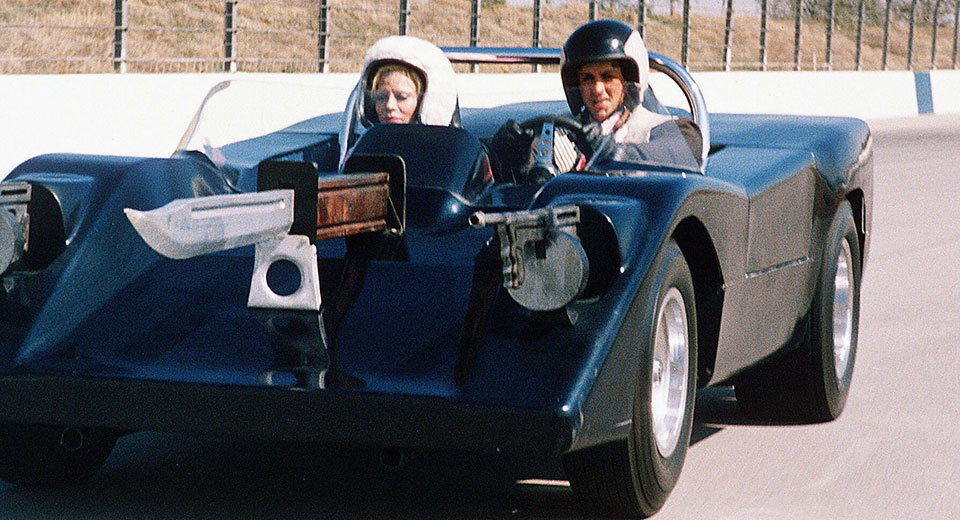 It’s a future vision that only the 1970s could conjure. In the wake of a global economic crisis, the United States has abandoned democracy for totalitarianism and martial law. Lacking agency, the citizens have developed a lunatic blood thirst, fueled by a government-sanctioned road race won by the driver who kills the most pedestrians. Babies and the elderly are especially high-point earners.

Death Race 2000 (1975), directed by Paul Bartel (Eating Raoul, Private Parts) but solidly a Roger Corman production, and one he is especially proud of, falls in the middle of a line of car-centric movies from that most dystopian, orange-and-brown hued decade. On one end rumble Vanishing Point (1971) and Two-Lane Blacktop (1971), on the other, closing out the decade, are Mad Max (1979) and The Road Warrior (1981). George Miller has pointed to Death Race as an influence on his Mad Max franchise, and it is plain to see: Bartel/Corman’s film balances comedy, morbidity, social commentary, and entertainment, and packages it in a wildly inventive spectacle of dragon-toothed muscle cars, explosions, and gore that is thrilling and sexy and self-incriminating.

Corman has spoken eloquently about the artistic freedom enabled by low-budget movies. Death Race showcases his genius for delivering high-octane action (there are more than a dozen explosions and several vivid car detonations) at dime-store prices. This film was made for about $300,000. There is no limit on the movie’s inventiveness and imagination, however. The transcontinental race is set in a wide range of locations, from rolling green fields to desert highways. Mundane interiors are gussied up with modernist furniture and nude bodies. Mary Woronov stars as the racer Calamity Jane, and Sylvester Stallone, on the brink of stardom, is Machine Gun Joe.

There is a lightly liberal politic at play—a severe woman with a bun named Thomasina Paine is leading a rebellion against America’s despotic leadership, and the movie has a loose media critique—but there is a giddy playfulness in this film that contrasts with the somber tone of even the most trivial entertainment of our own dystopian decade(s). The joy of the film is that it doesn’t ever take itself too seriously, but also never caters to what big-budget Hollywood executives might anticipate as the public’s desire for mindless entertainment. Death Race is classic Corman: a stimulating frolic that knocks the legs out from under the raised platforms of patronizing culture makers.