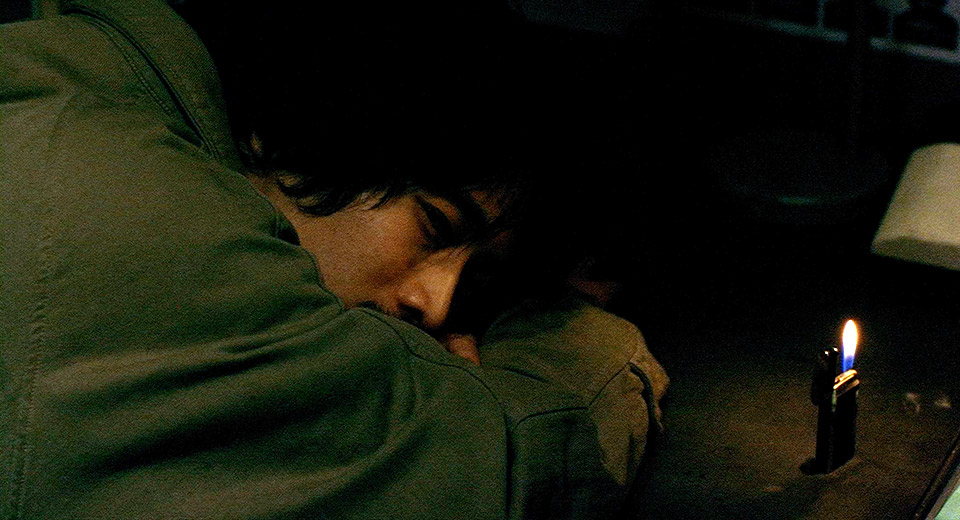 There are numerous points in Kiyoshi Kurosawa's breakthrough film Cure where a more conventional filmmaker would lead us down a rather familiar path. Instead, we drift from a police-procedural murder mystery to a foreboding psychodrama that dissolves all understanding of identity and consciousness. By the time it arrives at a decaying, abandoned building on the edge of Tokyo for the film's final confrontation, the only certainty we feel is that of the metastatic nature of violence.

Kōji Yakusho (Shall We Dance?) plays Takabe, a detective investigating a series of gruesome murders each committed by different people, but bound together by the same mutilation: a large "X" carved in the victim's neck. The other mysterious factor uniting them is the amnesiac drifter who offers no answers, but who comes into contact with each murderer before they unknowingly commit their crime. Masato Hagiwara's performance, however, while enigmatic and entrancing, never succumbs to the charismatic mastermind archetype of serial killer narratives (and whether or not the "label" of serial killer actually applies to him is one of the film's central mysteries). The way in which he reflects the capacity for violence back at Takabe and other characters is maddeningly haunting.

Arguably overshadowed by other films in the turn-of-the-century J-Horror canon, like Ringu (1998) and Audition (1999), Cure lives on as one of the more powerful works of the era. It shows Tuesday afternoon and Wednesday evening at Film at Lincoln Center as part of "The Bong Show," a series of films made or chosen by Parasite director Bong Joon Ho.