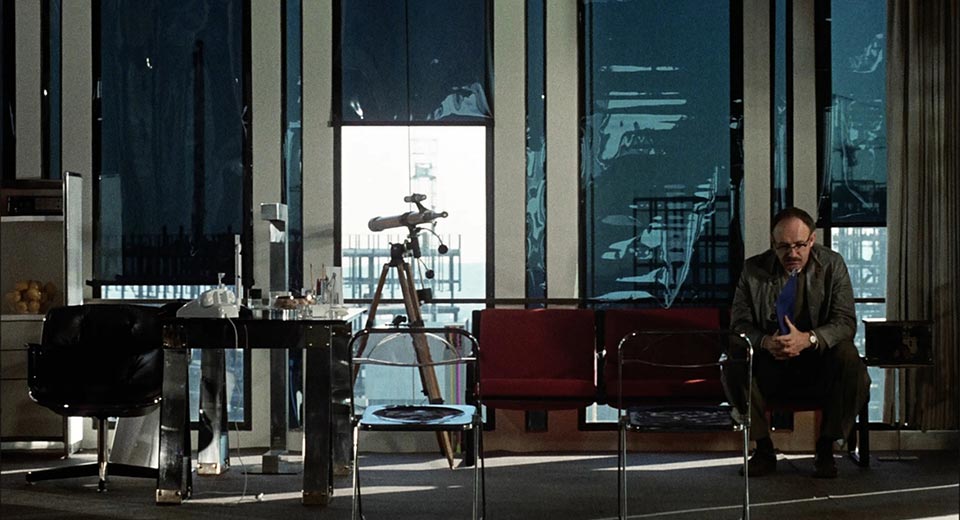 Francis Ford Coppola wanted his immediate post-Godfather breather movie, The Conversation (1974), to be "an index of little surveillance techniques." Besides being a catalog of cutting-edge early 1970s audiophile equipment with a self-reflexive thread—in David Thomson's words, "a glorification of what a movie can do with sound"—it's also an intimate character study (despite Coppola's original intention to have the protagonist be an empty cipher) and an accidental statement on the increasingly paranoid Nixon administration. But more than any of that, The Conversation is a meditation on professionals and professionalism.

Harry Caul (Gene Hackman) is in the surveillance business. He runs a small but renowned private company with a bicoastal reputation. He has impeccable professional ethics. Like a nuclear scientist willfully ignorant of the military or industrial applications of his research, Caul doesn't care what his employers' motives are; he simply delivers the material they pay him for. He attends security and surveillance conventions, shoptalks with out-of-town colleagues, and sticks to himself. He's defined by the contradiction between his job and his neurotic attachment to privacy. "I don't have any secrets"—of his own, that is.

Film Quarterly's Laurence Schaffer points out the "Eichmann-like" resonances of Caul and his colleagues' mechanical, uncritical dedication to their jobs. But they're less a banally evil stratum of blind functionaries than a hypocritical professional class whose business makes demands that are at odds with their personal convictions, like an environmental activist running a polystyrene factory for a living. They manage this apparent conflict by making a clean separation between the public and the private, between business and pleasure. "You're not supposed to feel anything about it, you're just supposed to do it."

Coppola himself is a member of such a professional class. A 1974 interview in Filmmakers Newsletter between him and Brian De Palma demonstrates their emphasis on technique. Almost the entire conversation is about Coppola's writing process, details of the shoot (budget, schedule), and tweaks made in post-production. Hardly any attention is given to the film's themes or politics—it's all How, no Why. Just like Harry Caul and his colleagues, they come off as a couple of guys interested only in doing their jobs well. Caul's statement of professional principles could have been an order from Coppola to sound designer Walter Murch—"I don't care what they're talking about. All I want is a nice, fat recoding."