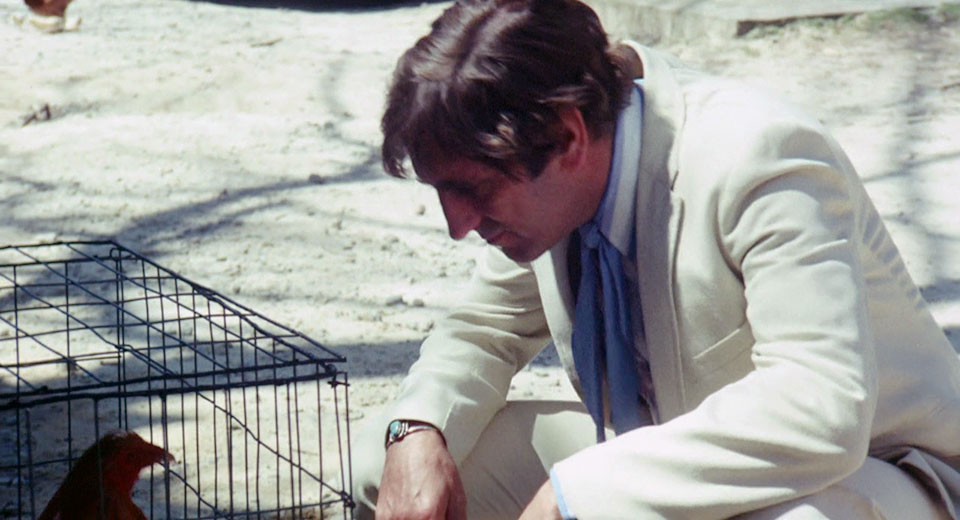 Today, the Quad Cinema presents a 35mm screening of Monte Hellman’s Cockfighter as part of Also Starring Harry Dean Stanton, a 27-film retrospective celebrating the beloved late actor who (coincidentally) passed away earlier this month at the age of 91.

Stanton plays Jack Burke, an established figure in the Southern cockfighting circuit, decked out in flashy suits with matching silk scarf ties, who maintains a semi-friendly, long-term rivalry with Frank Mansfield (Warren Oates), a talented but reckless competitor who lost his chance at winning the Southern Conference Cockfighter of the Year medal after a boastful challenge gone awry. “You got two little faults, Frank,” Jack chastises, “you drink too much and you talk too much.” Taking that to heart, Frank refuses to speak until he wins the coveted medal. After losing his last gamecock, along with his trailer and the remainder of his cash, Frank starts out again from the bottom as a man obsessed, sacrificing personal relationships and anything else that gets in his way.

As in the source novel by Charles Willeford (who also penned the screenplay and makes a memorable appearance as an aging cockfighter on the verge of retirement), Hellman’s film goes into considerable detail about cockfighting throughout Frank’s odyssey, drawing us into a hermetic, macho subculture full of its own particular rites and rules of engagement with an ethnographer’s sense of fascination. This includes the cockfights themselves, which are shown repeatedly, often shot in close-up and shown in slo-mo (those sensitive to animal cruelty be warned).

Cockfighter plays out with more naturalism and realism than the type of exploitation flicks typically associated with producer Roger Corman, who was hoping to tap into a more commercial audience. A bold gamble that resulted in a flop upon its release. “To my knowledge, no one had ever made a picture about cockfighting,” Corman recalls in his autobiography. “Now I know why. No one wants to see a picture about cockfighting.” Thankfully, that’s not entirely true and the film has since become something of a cult classic. Hopefully a restoration will come along somewhere down the line.