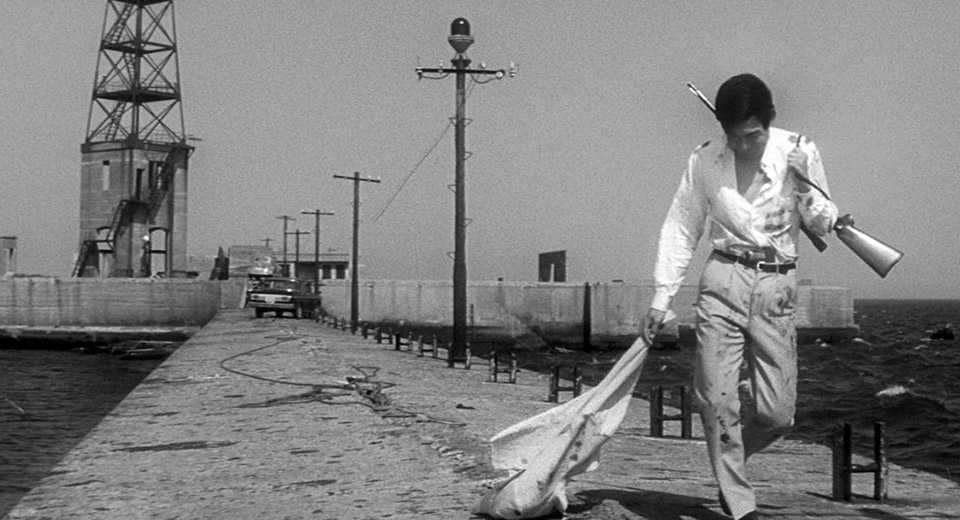 Seijun Suzuki once told an interviewer that "making things is not what counts: the power that destroys them is." Can the position of an iconoclast be expressed any more clearly? Some directors like to be modest and self-effacing, preferring to attribute most aspects of their films to chance and gut feeling (like Frederick Wiseman, who always pretends to understand next to nothing about his process and his subjects), but Suzuki accepts the mantle of "cinematic destructionist" with bravado.

For someone who considers destruction a cardinal virtue, Suzuki paid remarkable attention to his sets and his images. In Branded to Kill, the city's architecture—from its modern apartment blocks to its monolithic infrastructures (elevated highways, tunnels, piers)—is often framed to look like an abstract painting, with human characters appearing as flaws in its geometrical purity. In his earlier film Youth of the Beast, much of the action takes place in conspicuously artificial sets, often with transparent floors so we can see what's happening in the basement and up above in a single long shot.

A question that keeps imposing itself: is Suzuki's reckless style a sign of joyful exuberance—like a lot of people say it is—or of deep cynicism? On the one hand, his films are clearly about little more than the tropes and conventions of both American gangster movies and the yakuza movies churned out by Suzuki's home studio, Nikkatsu, which he often parodied even as it supported his career. The plot of Branded to Kill consists of a bunch of professional killers killing each other to ascend in the rankings ("Why shouldn't I be Number One!") and the dialogue is a patchwork of clichés, such as "Killers live in a place beyond loneliness," "In our work it's kill or be killed," and "Booze and women kill a killer." (N.B. Comparing women and alcohol as two especially treacherous vices is a recurring theme in Suzuki's films.) On the other hand, these movies borrowed at least their backdrop from the reality of organized crime in Japan, but in such a heavily caricatured form that Suzuki clearly didn't give a damn about the drug-running, pimping, and gambling that was really happening in his country. The question is, can we learn anything about Japanese society from a movie like Branded to Kill, or would that be like trying to juice a billiard ball?