Attack of the Mushroom People 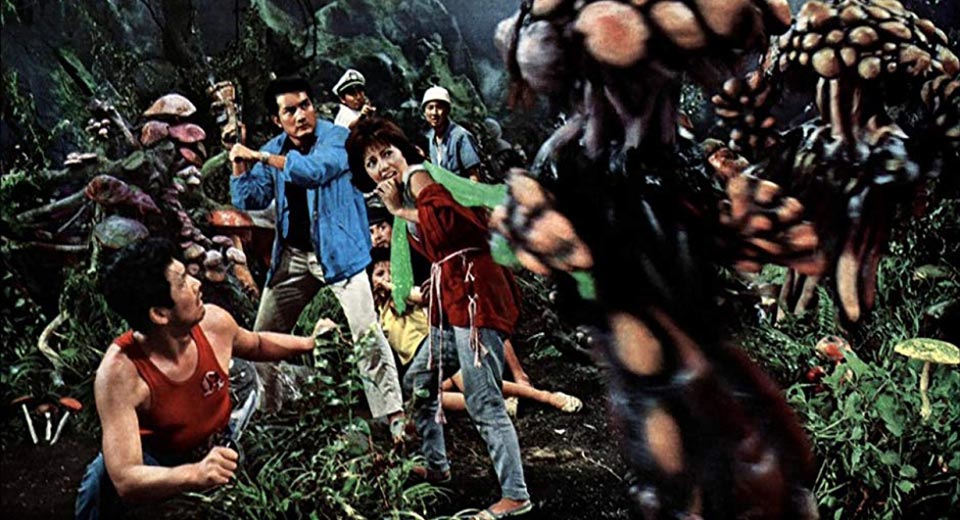 In fine TohoScope style, Ishirō Honda's 1963 masterpiece Matango (vomited onto American television screens two years later in 4:3, as Attack Of The Mushroom People) can't be mistaken for anything other than a square, sixties-paperback genre picture. And yet the film—adapted from William Hope Hodgson's 1907 ditty "The Voice In The Night"—also manages to one of the soul-sickest in Honda's polychromatic oeuvre, maybe second only to the original Godzilla in 1954. The premise is simple enough: a band of Tokyo bourgeoisie escape for the weekend on a yacht belonging to a wealthy rakehill named Kasai. You know the type: his brother is the boat's actual skipper, but whenever Kasai gets a turn whenever he feels the need to manhandle the wheel.

Other vacate-rs include a shipmate, a sauced-up mystery novelist by the name of Yoshida, and Mami—a voluptuous torch singer named played by Kumi Mizuno, the grande dame of Japanese monster movies. (Mizuno later said of Matango, "It's my favorite movie. The monsters aren't really the mushroom people; it wasn't an ordinary ghost story!") Rounding out the passengers is a straight-arrow graduate student named Kenji (Akira Kubo) and his mousy girlfriend/student Akiko, as ruffled by the ribaldry above deck as she is by the waves below. Almost pathological frivolity ensues, with onlookers cackling while Yoshida's papers are blown into the glimmering ocean, mid-scribble. It doesn't take a genius to figure out where any of this is going, and soon enough a proper water-tank typhoon has embroiled the journey, which leads to the following curious exchange as Yoshida and Kenji attempt (literally) battening down the hatches:

YOSHIDA. You're a professor of psychology, right?

YOSHIDA. About women…. Is it true that if a guy treats them bad, then acts sympathetic towards them… they fall for him immediately?

KENJI. That's the way all writers think – not psychology!

(There can be no mistaking from exchanges like this that Kenji is The Sensitive One.) Soon the ship crashes on the shore of a mysterious, mist-enveloped island, and the crew comes across an older boat, ragged to the point of looking like a J.M.W. Turner painting. It turns out this schooner once carried a team of scientists, which gives Honda and his cinematographer Hajime Koizumi the chance to punch in on some truly nervewracking images: reptiles soaked in formaldehyde, moss-covered stethoscopes, an embalmed turtle with no eyes. The crew boards up inside, but by this point booze and food are in scarce supply, and this is where the screenplay begins to really turn its screws on the ensemble—something which, it must be said, happens largely along the lines of the men's feelings towards the two-woman contingent of Maami and Akiko. The ensemble hear the news of their own disappearance on the radio, effectively snubbing out any hope of being found—societal death presaging the corporeal, just before the electricity cuts out.

But then something extraordinary happens: mushrooms are found in a forest just outside the boat. Lubricated by fungus, the characters don't just find sustenance—instead, their endemic character traits grow to swallow them. The greedy Kasai becomes greedier; long after everybody has gotten on everybody else's nerves, Mami inexplicably grows more alluring with each delirious nibble, to the degree that she's accused to playing the men against each other. The mushrooms are toxic, radioactive even, but it's all they've got, and so the film's jaunty, forgettable expository passages become something of a cruel joke as the crew tears itself apart. Kenji and Akiko manage to resist the fungus for only so long, and their impossible love is the closest Matango has to a heart, wherein his will to stay human juts painfully against her desperate will to survive. What to do when those are no longer the same thing?

Matango differs mightily from its kaiju predecessors (as well as Honda's Beauty And The Liquid Men andThe Human Vapor, forming an unofficial trans-human trilogy) in that the mushroom creatures are onscreen for less than twenty minutes. There are three primary sets: the first boat, the second, and the forest, which appears only in brief glimpses until the film's shattering climax. Given that Honda and his crew – including Koizumi, special effects master Eiji Tsuburaya, and screenwriter Takeshi Kimura—spent the 1950s and '60s cranking out, on average, two films a year, it's easy to look at Matango and wish conditions had permitted a longer preproduction period; the filmmakers allegedly found the finished mushroom people more comical than terrifying. Whatever their handicaps of verity, these grasping, syntho-vegetations create a more tangible stress than their contemporary CGI equivalents; in fact, Matango offers a delirious reversal of the typical SFX pattern demonstrated in Honda's work. The mushroom people tower over their human prey, but only by a few feet at a time – so whereas the 400-foot-tall Godzilla routinely appears flattening entire cities, here the dominion of Matango grows from bottom to top of the 2:39:1 frame.

The film's only "trip" comes when one of Honda's characters eats his first cap, throttling viewers head-first back to Tokyo—a hazy montage drawn up in vaporous wisps of color, with sweaty exotic dancers crossfaded against soft-focus neon, flushed out by a soggy jazz refrain that harkens back to Fritz Lang's use of "My Melancholy Baby" in Scarlet Street. Survivor's guilt is to Honda's film as murder is to Lang's, and Matango's crescendo of fear actually proves a clever narrative cul-de-sac; the mushroom forest is as fake-looking as Tokyo—which Kenji sees through the bars of an insane asylum, bookending the narrative. It's a beautiful contraption – an impossibly manicured, neon-scrit model Ginza in Tsuburaya tradition, like a magnified slice of the fiberglass-and-wood cityscapes typically ground to a fine dust in Honda's monster pictures. Reality, then, was the trip to the island: the real nightmare is life afterwards.