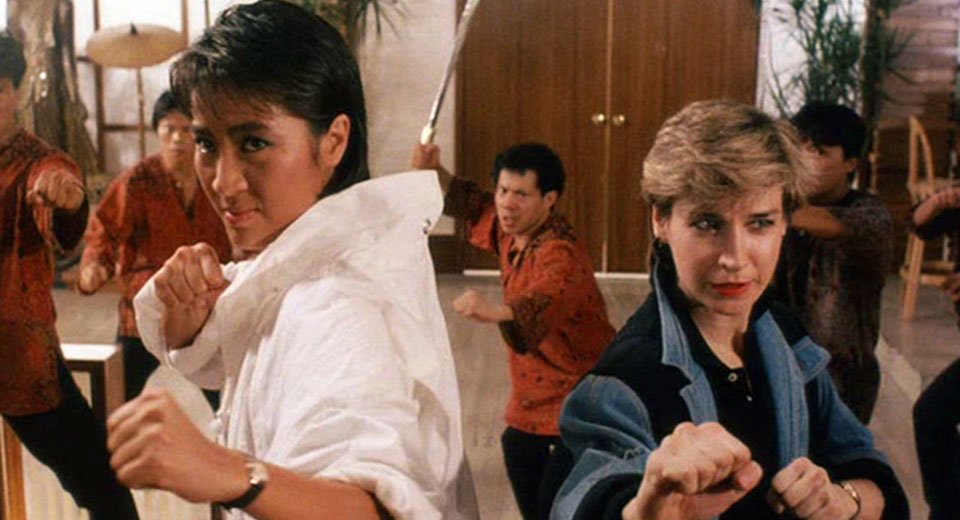 Sisters are doing it for themselves at Subway Cinema’s 7th Old School Kung Fu Fest. Corey Yuen's Yes Madam takes this year's theme, “Wonder Women of the Martial Arts," to the next level. What’s better than a take-no-prisoners lady cop gunning for justice? TWO lady cops, fists a-blazing! Yes Madam kicked off Hong Kong’s ‘girls with guns’ genre, spawning six sequels in its In The Line Of Duty series alone.

The film features dream-team Michelle Yeoh and Cynthia Rothrock busting heads back to back in their breakout roles. Yeoh trained at the gym eight hours a day to be able do her own stunts; Rothrock, part of a professional martial arts team, so impressed film scouts they hired her on the spot and changed her character from male to female.

As with so many 80s international action thrillers, the heart of the problem is microfilm. In this case, microfilm containing the details of translucent-shirted Triad leader Mr. Tin’s extensive, unassailable crime ring. Tin's assassin murders an English businessman during a deal gone south. Before he can find the blackmail material, small-time thieves Aspirin and Strepsil break into the room posing as Room Service. They clean the place out, unwittingly taking the microfilm with them.

For something named Yes Madam, the film focuses too long on the antics of Aspirin, Strepsil, and partner-in-crime Panadol. Casting director/producer par excellence Tsui Hark (Zu Warriors of Magic Mountain, A Better Tomorrow) as Panadol mostly makes up for it, especially after a bonkers workshop-slapstick scene. The trio run afoul of the law, and Police Head Investigator Ng (Yeoh) realizes they’re the bait she needs to crack Tin’s case wide open.

Rothrock plays detective Carrie Morris, in from Scotland Yard to investigate the businessman’s murder. She meets cute with HK police after a punk makes the mistake of taking her hostage at the airport – one ‘scorpion stinger’ and several roundhouse kicks later, he’s laid out and Morris and Ng are on the case. Ng’s calm matches Morris’ fire as they play good cop, bad cop with perps. Bumbling male coworkers chastise Morris that with her sharp attitude, she won't get married, but both policewomen are so blatantly superior and invested in their jobs it reads as promise more than threat.

From here on out it’s all pastel power-jumpsuits and ladies taking the law into their own hands, leading to the film’s jaw-dropping final fight scene. It’s a glass-smashing, kick-flipping, multi-level battle whose physical brutality and speed will leave you dumbfounded.