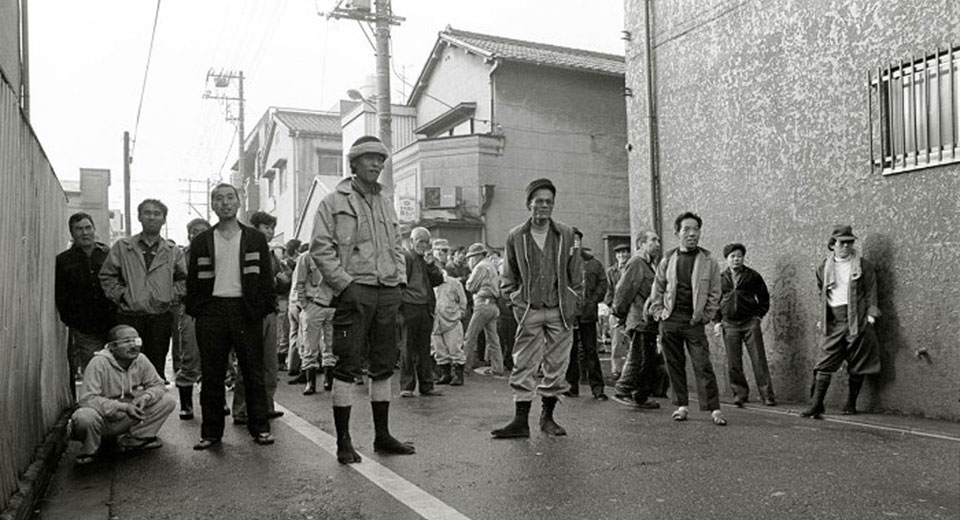 In a 1983 communique addressed to the day laborers of Sanya, a sprawling slum in eastern Tokyo, filmmaker Mitsuo Sato pledged on behalf of his documentary collective: "It will take two years to make this film. During that period we will stay in the yoseba ["gathering place" or "workers' ghetto"], making a living from day labor as you do. ... By involving myself with this project, I want to wash off all the dirt I have accumulated on myself as a movie-maker for the past fifteen years and then hopefully to be born again." Soon after, Sato was killed by a right-wing imperialist gangster (of the locally powerful Kanamachi family) and the project was continued by the collective under the leadership of Kyoichi Yamaoka, who was himself later shot to death by a member of the same gang. With stakes this high, the filmmakers' dramatic words lose any hint of grandiosity they may otherwise have had. Yama—Attack to Attack is militant proletarian cinema in an uncommonly literal sense, its makers having approached the project with a near-religious fervor.

The filmmakers conscientiously documented the day-to-day harassment that Sanya's 8,000 day laborers endured. Cops would go out on cold nights looking for men sleeping on the streets and douse their fires so they'd freeze to death. The Kanamachis set up a "Mutual Aid Society" that pretended to help the laborers find jobs and housing but actually just managed them on behalf of a few powerful construction firms. When the laborers organized a bona fide union committee, the yakuza responded with propaganda and intimidation. In November 1983, a 160-day conflict began when laborers overturned a Nishido propaganda van, igniting months of street battles. But it's not all cathartic cop-fighting melees illuminated by photographers' flashes (although there is a lot of that). We also get glimpses of these people's everyday lives as dockers, diggers, scaffolders, and—often—heavy drinkers (construction sites and bars are the most common locales).

Tonight's screening at Anthology is very rare; only three 16mm copies exist, and although one of them is screened in Japan with some frequency, institutions abroad receiving Japanese government subsidies are not encouraged to exhibit it.

Take note of the score. Composed by Wataru Okuma but, in an appropriately communistic move, credited to the Kotekitai collective, it’s an abrasive and weirdly corny barrage of percussion and horns.