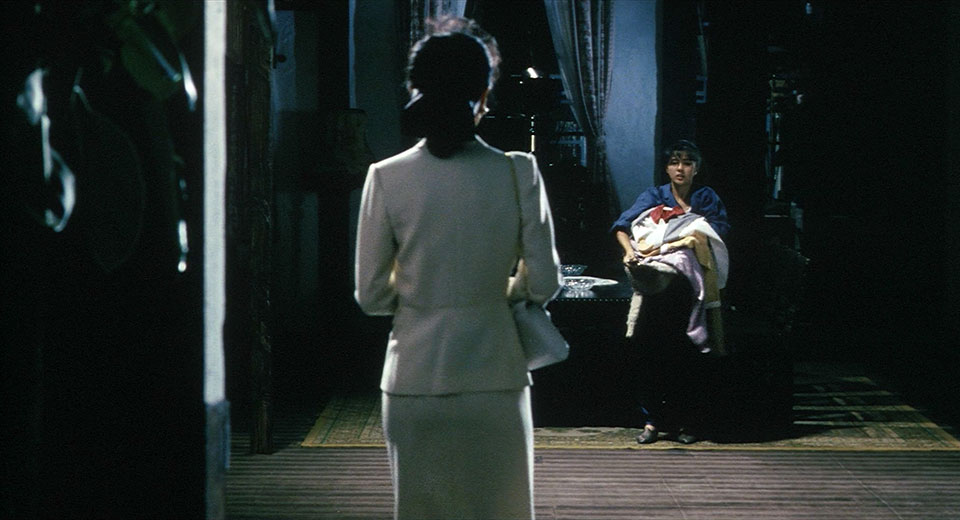 Leave it to a Kadokawa picture to one-up the hoary cliché that all the world’s a stage. Doubling (literally) the melodrama and turning it into meta-commentary on the demands of being an actress/idol in Japan, W’s Tragedy uses the frequently adapted story of the same name as jumping-off point. A soap-opera tale of lies and suspicion surrounding the murder of a wealthy family’s patriarch, the original W’s Tragedy is nested as the play within the movie young ingénue Mita (Hiroko Yakushimaru) pins her hopes of stardom to.

Blurring life and performance right out of the gate, the film opens with a literal dawning of Mita’s new self. She leaves her acting teacher’s apartment, a virgin no longer, having slept with him both to gain Stanislavsky-method experience, and because she likes him. On her way home, her spontaneous declaration dedicating her life to performance on an outdoor stage wakes Akio (Masanori Sera), a man who doggedly pursues Mita the rest of the film.

Female sexuality is presented as necessary tool, as when experienced actress Hatori (Yoshiko Mita) forces every female troupe member to admit male patronage floated them until they could establish themselves, and dangerous liability, as marriage effectively ends women’s careers, and sex scandals can make or break a star.

Indeed, Mita’s big break comes covering a scandal for the star—a side perk being nabbing the plum role from another young actress booted at Hatori’s demand. Mita’s true first performance, her press debut, convinces everyone except filmgoers—whether an intentional choice or reflection of Hiroko’s limited range is moot; either adds another layer to the highly self-reflexive film.

The play’s events increasingly mirror Mita’s reality as she navigates dividing into eternal internal performer and audience (i.e., an actor), even as filmgoers gain privileged views of her performance, including close-up and POV shots unavailable to play-goers—reminding us we are witnessing a performance of a performance.

All About Eve is frequently name-checked with this film, and certainly the elements of a star mentoring a striver and behind-the-scenes drama are there. But with the solidly 80s outfits and pastels, a school full of aspiring actors, and starring a real-life idol, W’s Tragedy and its reflections on the price of acting is more reminiscent of Fame. Nothing could be more appropriate for Hiroko’s second appearance (after School Girl And Machine Gun) in Japan Society’s Pop! Goes Cinema: Kadokawa Film & 1980s Japan.