Woman in the Dunes 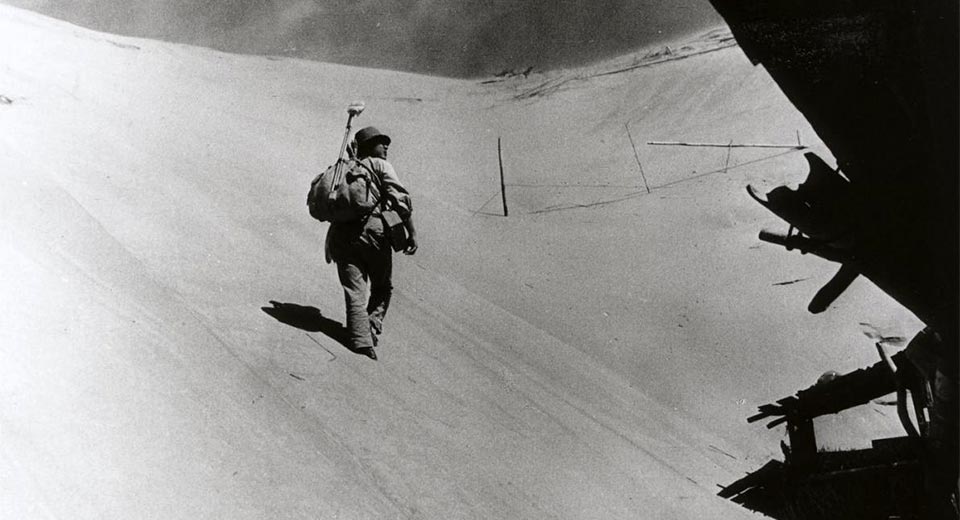 Sea, sex, and sun on the beach: Hiroshi Teshigahara’s drama has all of the ingredients of a summer romance, but this highly symbolic erotic drama is a long way from light popcorn fare. The acclaimed second collaboration between Teshigahara and novelist Kobo Abe, Woman in the Dunes is concerned with only the most existential of questions, such as the meaningfulness of existence, the repetitive nature of work, and the nature of captivity and freedom. The plot is deceptively simple: a city school teacher ventures out to a remote seaside town to collect insects. He misses his return bus home, and villagers persuade him to find lodging with a local widow who lives at the bottom of a sandpit. When he tries to leave the next morning, he discovers he is trapped indefinitely. As he gradually learns, hIs sole duty is to shovel the constant shifting sands which threaten to bury the entire village. Desperate at first to escape, he ultimately submits to this never-ending task and purpose in life.

Woman in the Dunes is fundamentally a Japanese take on the myth of Sisyphus, and the cinematic world of the film verges on madness. The central component of that world is sand, which has never been captured more beautifully on celluloid. Teshigahara has stated that the sand is a character in its own right, and its depiction suggests the fragility of the human condition, for all life is eventually ground down to dust. Hiroshi Segawa's cinematography harnesses all of the surreal, shape-shifting behaviors of sand in air and water, and the effect is simultaneously kinetic and ethereal, real and imagined. When viewed in 35mm, the visual slippage between the grains of sand depicted onscreen and the grain of the black-and-white film is quietly breathtaking.

Produced independently and made for a scant $100,000, Woman in the Dunes earned widespread recognition and acclaim from international audiences. (Teshigahara even received an Academy Award nomination, the first for an Asian director.) A harrowing summertime classic, Woman in the Dunes must be viewed in in 35mm to truly appreciate its sumptuous, particulate beauty.