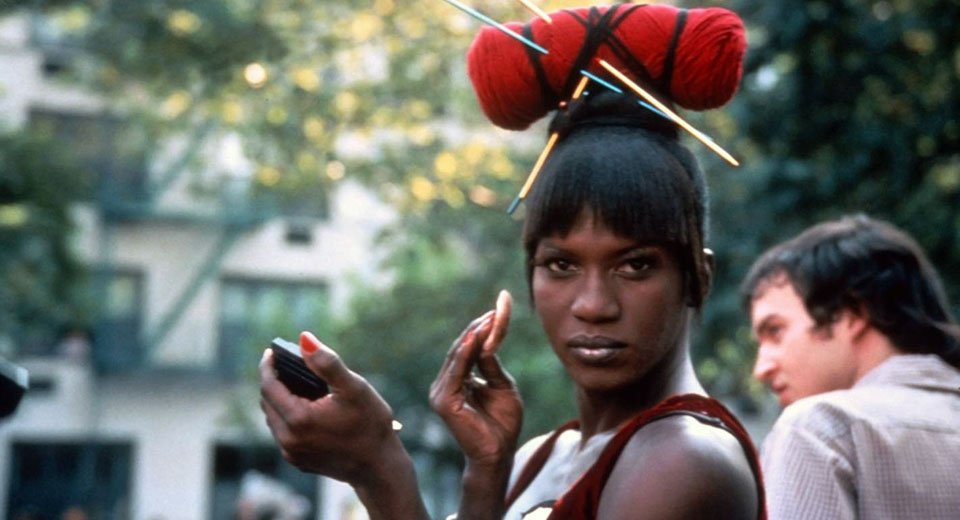 Tonight Anthology Film Archives kicks off its “Crossdressing on Screen” series, guest curated by the legendary John “Lypsinka” Epperson, with a screening of both the 1995 feature documentary Wigstock: The Movie and the 1987 Tom Rubnitz short video of the same name. Lypsinka and Barry Shils, who directed the 1995 feature, will be present for the screening.

Together, the two versions of Wigstock: The Movie chronicle the development of the drag festival from its grungier beginnings in Tompkins Square Park in the middle of the Reagan 80s to the enormous crowds of its Christopher Street Pier debut in the mid-90s. As legend has it, Wigstock was started in the spring of 1984 when a group of bored drag queens and performers from the Pyramid Club, led by Lady Bunny, crossed Avenue A to put on an impromptu drag festival in the Tompkins Square Park bandshell. Mixing footage shot at the second and third Wigstocks, in 1985 and 86, the Rubnitz short captures the festival in its humbler beginnings. The 1995 feature also (somewhat confusingly) mixes footage from two different festivals: hugely attended festivals held in the original Tompkins Square Park location in 1993 and at the Christopher Street Pier in 1994.

“It’s the 90s, honey,” Lady Bunny says at one point in the 1995 feature, and this refrain is repeated by others throughout the film. “You know, it’s in to be gay in the 90s. … It’s a new day,” RuPaul optimistically proclaims from the stage. Change has come since Rubnitz shot his short video in the 80s. The crowds look a lot bigger. In the Rubnitz short, Lypsinka gives an impressive solo performance. In the Shils feature, she stages an intricately choreographed performance with an array of dancers. (She has even, by this point, been hired by Thierry Mugler to walk the runway at fashion shows, we are informed.) RuPaul, meanwhile, has entered the mainstream with “Supermodel of the World.” Released the same year as To Wong Foo, Thanks for Everything! Julie Newmar and a year after the crossover success of The Adventures of Priscilla, Queen of the Desert, the 1995 Wigstock: The Movie is the beneficiary of this increasing mainstream attention.

At one point, Lady Bunny says of the Wigstock festival, “The daylight is no friend to the dragoon, that is for sure. But once a year we manage to brave the sun’s harsh rays … for our fans.” The Shils documentary performs a similar function. Most documentation of New York drag performance consists of dimly lit video shot in nightclubs. Many of these video documents are the work of brilliant artists, like Rubnitz or Charles Atlas, or video vérité master Nelson Sullivan. A large part of the charm and excitement of the 1995 Wigstock: The Movie, however, is that this is a mainstream concert film, released in theaters on 35mm and in video stores on VHS and, later, DVD.

Not that the 90s are as sunshiny as all this would suggest. It is worth noting that when the Wigstock: The Movie feature was being filmed, the “AIDS cocktail” had not yet been developed. In the documentary, Joey Arias lists the many performers lost to AIDS, including Klaus Nomi, John Sex, and others. Honey Dijon also brings up the toll the AIDS crisis has had on the community, as well as the racism, sexism, and homophobia they face every day, and the difficulties for many in the community to simply make a living. That these brief interviews are folded into what is largely a traditional concert film, one that would be available in Blockbuster video stores around the country, seems significant. Candis Cayne, Chloe Dzubilo, and others give voice to trans activism in the 90s. (Dzubilo on gender binaries: “It’s ridiculous, it’s 1994.”)

A fascinating document of a pivotal moment in queer performance and politics, the feature’s enduring appeal, however, lies in the gender binary-smashing performances it documents, including an infamous performance in which Leigh Bowery “gives birth” to his wife, Nicola Bateman, on stage and a stunning drag king turn from house diva Crystal Waters (her fake mustache falls off early in the performance) and back up dancers (including her choreographer Michael K. Williams, later known as Omar Little on “The Wire”).