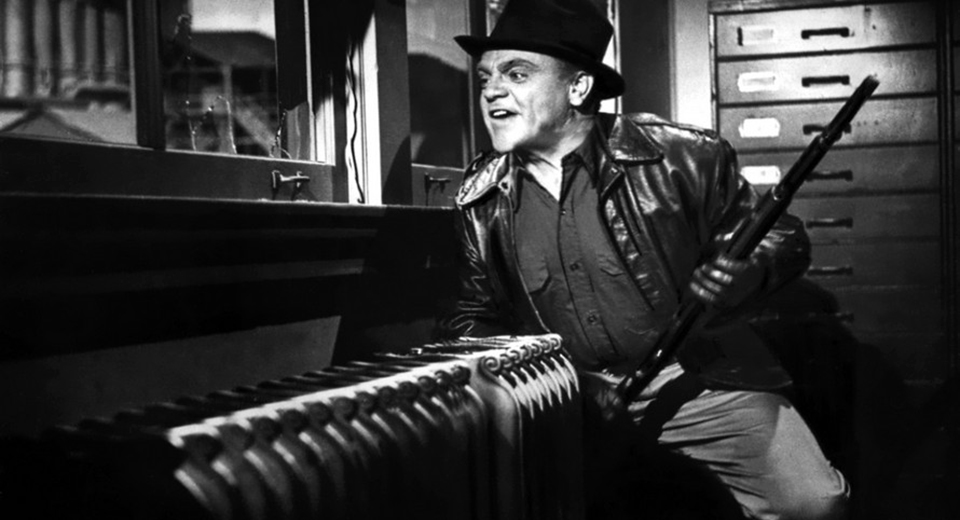 In the fallout of a train robbery, career hood Cody Jarrett (James Cagney at the boiling point) avoids the death sentence by setting himself up to take the fall for a robbery in Illinois. It seems like the perfect escape plan—suffer a couple years in lock-up, and then split the take with the crew he’s left behind (held down, in his absence, by Jarrett’s devoted mother—Margaret Wycherly—the only woman he ever loved). Too bad he’s on the bad side of straight-arrow investigator John Archer—shot by Cody in a getaway and bent on vengeance—who contrives to set the bad guy up from the inside by getting him to confess to undercover cop/fake inmate Edmond O’Brien.

And that’s just the first half hour! Directed like an IHOP buffet by Raoul Walsh, White Heat gives you more than you asked for and everything you didn’t know you wanted. Opening on a robbery sequence that might be the centerpiece of a smaller picture, Walsh keeps turning up the flames with set-piece after set-piece (Prison break! Tear gas! Car chase via radio signal!) right up to the film’s hell-fire finale.

But though Walsh provides all the thrills and chills, the spirit of the film lies in Cagney. Returning, tail-between-legs, to Warner from a string of underperforming independent productions, his performance seems burnt to a crisp with disappointment, which Cagney leverages into a demonic charisma that transforms Jarrett into something more than deplorable. This might sound like business as usual in our time, but the callous and cruel inhumanity with which Cody slaughters anyone who gets in his way feels truly insane, even now.

That there’s a void in his soul only mother can fill becomes more meaningful once he gets in too deep with O’Brien’s “Vic Pardo,” a different sort of con man who commits what is maybe, in this landscape of lawlessness, the worst crime: getting a man to show his feelings. Straddling the boundary between witness and enabler, O’Brien’s flaky moral stance is inferred to be, by transmission, ours. Whether you want to walk that road is up to you—in any case, the movie is a scream. Come for the glamour close-up of Virginia Mayo snoring, stay for the pathos.