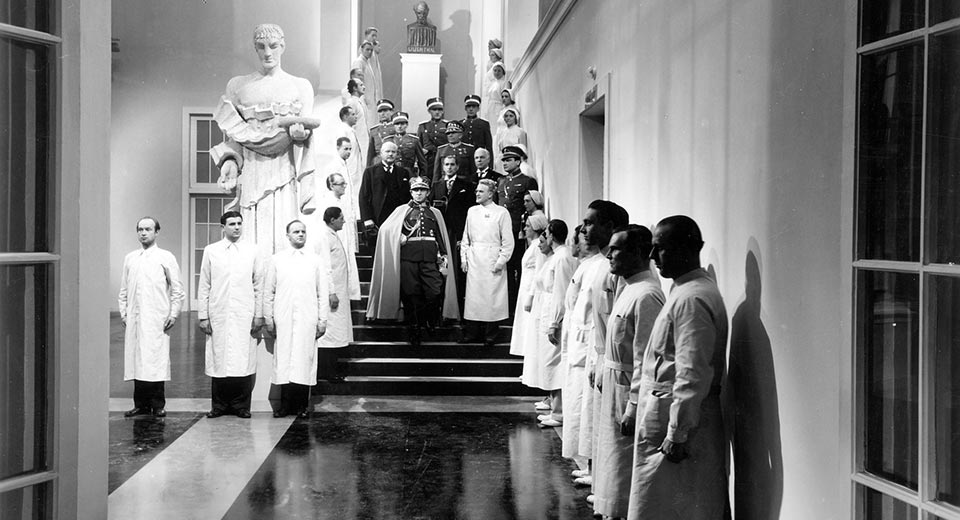 The White Disease was recently restored by the National Film Archive in Prague and is streaming for free in HD with English subtitles on the Česká filmová klasika YouTube channel, which is operated by the NFA and Blue Sky Film distribution.

The White Disease (1937) opens on a massive crowd of workers gathered to hear a dictator’s full-throated appeal in favor of his country’s right to expansionist nationalism, claiming new lands “even if it means seizing them at the cost of weaker and decaying nations.” As the crowd roars its approval, one troubled man stands alone: Dr. Galen (director Hugo Haas), who harbors a secret—the cure to a "white plague" that is mysteriously only affecting people middle-aged and older. Galen was once a revered medical student, but at present he works in humble obscurity treating impoverished patients. By contrast, Prof. Sigelius (a nefariously monocled Bedrich Karen), who runs the largest national hospital, merely prescribes odor control to mask the smell of the patients' necrotizing fasciitis. Galen visits the smug medical official—in the stark white hospital, whose harsh shadows cast by window grids suggest a prison—and convinces the professor to grant him the ability to treat several of his patients. The results earn the attention of the dictator, known as “The Marshal” (Zdeněk Štěpánek, later star of astonishing Czechoslovak sci-fi classic Ikarie XB-1). There’s only one snag: Galen, a radical pacifist, reveals his intention to only share his methods if The Marshal will close the munitions factory and renounce war; otherwise, he will continue to only treat poor patients. You can guess the response.

The White Disease is adapted from a play of the same year and same name (Bílá nemoc) by revered Czech writer Karel Čapek, best known for his science fiction novel R.U.R., which originated the use of the term "robot" to refer to synthetic lifeforms. The White Disease fearlessly wears its outspoken anti-fascist heart on its sleeve. Written and filmed on the eve of the Western betrayal and the swift Nazi occupation of Czechoslovakia, The White Disease portrays its Nazi surrogates as a morally petty, bloodthirsty regime: in refusing to lay down arms to stem the tide of war and disease, The Marshal proudly imagines himself riding through ruins as his flesh decays and soldiers cry out, “Hail his excellency, the Grim Reaper!” (It’s implied that The Marshal is OK with the plague affecting the middle-aged and older — it’s the youth who will be the torchbearers of fascism and the ones to die in war.) There are chilling premonitions of the Holocaust, including a scene in which a lab accident at the weapons plant unleashes experimental poison gas on scientists, killing everyone in a display of its effectiveness that pleases The Marshal. But where Haas and Čapek show particular brilliance is in the domestic scenes of bourgeoisie mid-level bureaucrats admonishing the press for sharing the unpleasant facts about the plague or imagining that there’s no way it could hit home.

Čapek, who was not Jewish, but nevertheless an outspoken critic of anti-Semitism, refused his chance to leave Czechoslovakia. Barely a year after the play and film, during the Nazi invasion of Czechoslovakia, the Gestapo named the author “public enemy number two” (behind his associate, President Edvard Beneš) and went to arrest him — only to find he had just died some months earlier of pneumonia at age 48. Čapek's wife was arrested, and his brother Josef, a painter and cartoonist, was taken into custody and died shortly thereafter in a concentration camp. One has to wonder whether the title The White Disease is meant as a double entendre.