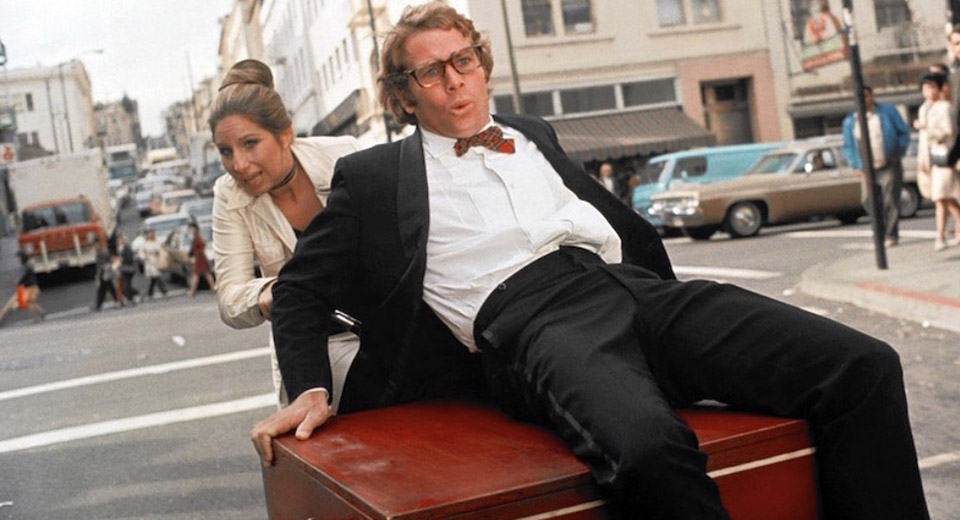 Peter Bogdanovich's genre worship reached its pinnacle in his third film (fourth if you count the pseudonymous Roger Corman joint Voyage to the Planet of Prehistoric Women), the Last Picture Show follow-up What's Up, Doc? (1972). Here, for the first and only time, he outdoes his idols, fashioning a screwball comedy that's more fun, charming and astonishing than Howard Hawks' hallowed Bringing Up Baby.

Barbra Streisand earns every superlative ever hurled her way as Judy Maxwell, a cyclonic synthesis of Bugs Bunny and the three mad Marx Brothers. A perpetual undergrad armed with an encyclopedic knowledge of everything from gemstones to philology, she falls for Ryan O'Neal's befuddled geography professor in a drug store and proceeds to sow chaos in his professional and private lives all while trying to seduce him. The plot concerns the mistaken identities of four matching suitcases, which fall in and out of the hands of O'Neal, Streisand, CIA spokes, European thieves and a wealthy dowager, in a scheme of ingenious comedic machinations worthy of Rube Goldberg. But the show belongs to Streisand, whose titanic charisma in the film is still capable of seducing younger audiences who have come to associate her with Fockers and adult contemporary slow jams. In support of their star, Bogdanovich and writer Buck Henry supply a host of quotable quips and a dizzying onslaught of background gags.

The nagging question of What's Up, Doc? is why the hell Ryan O'Neal is in it at all. O'Neal is both a talented thespian and effortlessly intriguing movie star, but he's woefully out of place here. To his credit, he valiantly tackles the role of absent-minded professor, which, as written, never leans into the absurdity of such a gorgeous, manicured hunk spun into a muttering milquetoast. Elaine May and Warren Beatty would go full-tilt on a similar set-up in Ishtar by relentlessly and hilariously commenting upon Beatty's supposed homeliness, but Bogdanovich never embraces O'Neal's antithetical fit in the role. Still, this missed opportunity is the glaring flaw that throws the rest of the film's inspired comic brilliance into relief.