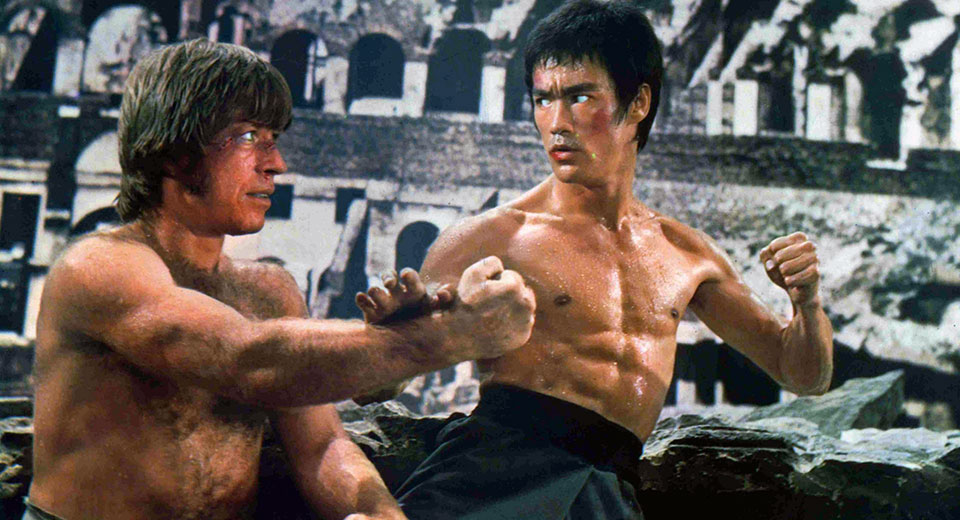 The Way of the Dragon (1972), Bruce Lee's most autocratically realized film (he produced, wrote, and directed, in addition to starring) feels—at least for the first half—kind of like a Jacques Tati movie. Early 1970s Rome, with its sideburned businessmen and chic ragazzi, provides a Playtime-reminiscent background to the slapstick antics of Lee’s fish-out-of-water character, Tang Lung (Chinese for ‘China Dragon’). The gags begin as soon as he lands: starving, he walks into an airport restaurant, points at random dishes on the indecipherable Italian menu, and is brought five soups. He shrugs and quaffs them down while a waitress rolls her eyes, all to the accompaniment of Henry Mancini-style pizzicato strings, bubbly flutes, and xylophones. Inexplicably, Tang is also constantly running to the bathroom, outraging Westerners who walk in on him squatting on toilets. Culture shock is the principle of the movie's jokes: Tang can’t tell a Beamer from a Mustang from or a Rolls, and is astonished to hear that acquiring a gun in Italy is "no problem," that "anyone can buy one."

Tang has been called in from Hong Kong to help Ms. Chen (Nora Miao) defend a restaurant she has just inherited against a bunch of mafia goons whose Julian Schnabel-lookalike boss wants the premises and won't take no for an answer. After Lung dispatches the woefully unskilled Bee Gees-lookalike thugs, they call in foreign reinforcements: first Korean Whang Ing Sik, then Americans Robert Wall and Chuck Norris. Norris and Lee’s final showdown in the ruins of the Coliseum, a notoriously restricted monument, was shot mostly without a permit. It’s cat vs. bear, as Lee prances around Norris’s hulking figure, rips hair from his chest, and emits his trademark feline battle screams. The symbolism is underlined by the presence of a stray kitten, who watches the match from beginning to end.

As much as a clash between cultures, The Way of the Dragon is a tangle of different fighting styles. Like Norris, Whang Ing Sik plays a karate expert, but was actually a practitioner of hapkido, which he taught to Jackie Chan and Sammo Hung (who’s got a brief appearance in Lee’s last movie, 1973’s Enter the Dragon ). The restaurant’s maladroit waitstaff spend most of their time on back-alley karate training, and ridicule Tang for being a devotee of Chinese boxing, a derivative of kung fu (Lee actually called his style Jeet Kune Do, also a form of kung fu). The waiters think only Japanese martial arts have any “real power,” while Tang maintains that “it doesn’t matter at all where it comes from.” This echoes a real-life statement Lee once made about racial prejudice: “no matter if your color is black or white, red or blue, I can still make friends with you without any barrier.” Still, Lee was acutely aware of the challenges his own ethnicity presented in a racist film industry, and The Way of the Dragon was partly aimed at fulfilling a revenge fantasy. “I’m an Oriental person,” he told his mother during preproduction, “therefore I have to defeat all the whites in the film.”