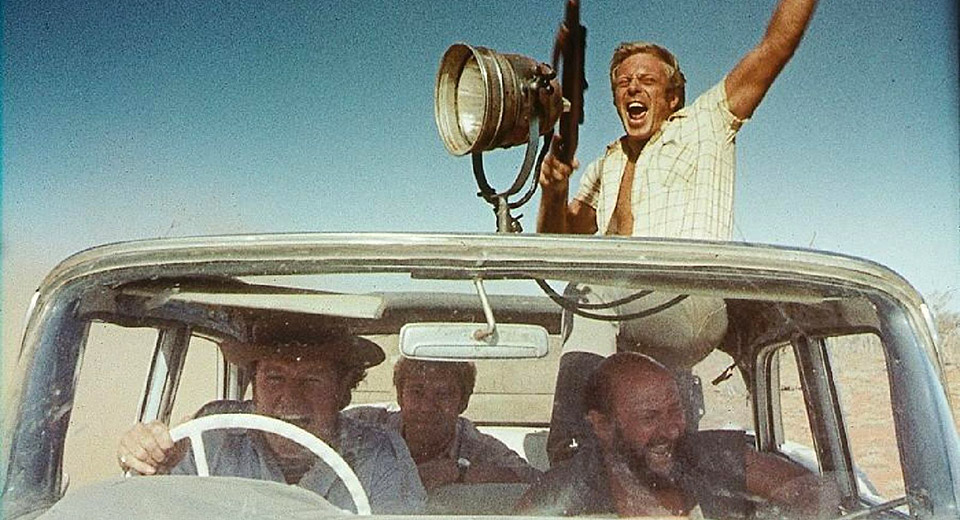 This screening is cancelled. Here's where to stream it or buy it on disc.

Screen Slate will put its listings on hiatus next week as we adjust to the pandemic and transition to "Stream Slate" mode. We're committed to continue publishing daily and paying writers. Here's how you can support us.

A sun-stroked nightmare of excessive drinking and aggressive male-bonding set in a desolate, nihilistic Australian outback, Ted Kotcheff’s 1971 Wake In Fright is an Aussie variant of a very 70s cinematic fantasy exemplified by films like Straw Dogs and Deliverance — the parable of the civilized man forced into extreme barbarism by a primitive world with a savage natural order. Opening with an plodding 360 degree pan across barren desert plains stretching towards infinity, Wake in Fright constructs its mental and physical landscape as one of complete mind-numbing emptiness. In a place so inhospitable, the film suggests, the only appropriate response is complete abandonment of the intellect and reversion to base instinct.

Stuck on a one-day stay-over in the sweltering city of Bundenyabba while headed to Sydney, John (Gary Bond), a stodgy overly-educated primary-school teacher, finds himself quickly noticed by the jovial locals. “Let me buy you a beer mate!” the men accost him through sweat-drenched smiles. The first beer — usually chugged hastily — inevitably leads to a second, third, and fifteenth along with a slow descent into evermore brutal and primitive behavior. On his first night John loses his money gamling on a coin toss; the second night ends with him waking up in the decrepit shack of an alcoholic doctor (Donald Pleasence) serving up gruel for breakfast. By the time dusk has rolled around on the third night his booze-filled fugue has descended into a nightmarish Kangaroo hunt depicted with brutal documentary footage of animal carnage and filled with kinetic savagery.

“All the little devils are proud of Hell” says Donald Pleasence early in the film, belying the simple-minded friendliness and good-manners that rest on the surface of these endless, infernal benders. While initially John responds to the calls for more beer and more horsing-around with a resistant smirk and softly-pleading apology that he must be getting on, the persistent and demanding hospitality of those around him makes escape ultimately impossible. While feral brutishness might dominate the wretched landscape, it is actually civilized pleasantries and neighborliness that keeps the whole social order stuck in its degenerate merry-go-round. Society and kindness are the root of inhumanity, not its antidote.