A View to a Kill 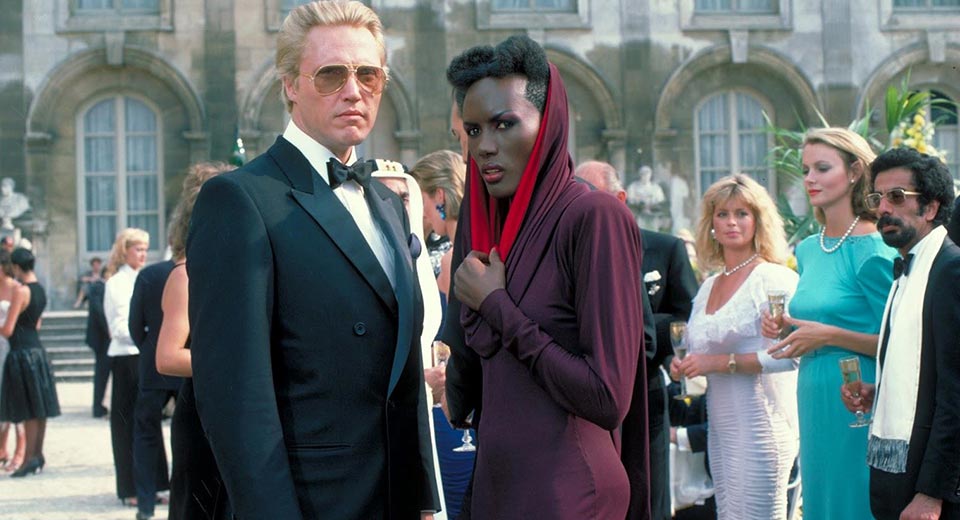 If the machismo fantasy of ‘classic’ 007 films leaves you cold, A View to a Kill ’s campy, half-baked take on Bond might be for you. The movie is ’80s cheese perfection, starting with the neon Nagel-goes-après ski opening sequence set to Duran Duran and continuing through the nonsense ‘plot’ about illegal horse-doping and flooding Silicon Valley to corner the microchip market via earthquake manipulation.

Roger Moore’s last outing as Bond is completely outshined by the villainous wonder team of Grace Jones as May Day and Christopher Walken as Nazi experiment/ex-KGB mogul Max Zorin. Rutger Hauer was approached for the role, but bleach-blonde Walken is a superior substitute, looking eerily similar but clearly enjoying the ridiculousness around him (contrasted with Hauer’s grim turn in the equally silly Nighthawks).

While Jones and Walken look like they’re having a ball, Moore just seems exhausted. Co-star Tanya Roberts does her best as Stacy Sutton, buxom young do-gooder geologist and slightly less passive Bond Girl™, but with Moore acting like he’d prefer a nap to a make-out session, the movie belongs to the goofy action sequences and villains. And they are goofy: James Bond doesn’t just ski away from the KGB, he invents snowboarding and busts powder down the mountain to a sound-alike Beach Boys cover of “California Girls.” A tipster isn’t just murdered in the Eiffel Tower, it’s restaurant assassination by butterfly.

A View to a Kill also boasts the greatest defenestration in film history, with May Day dropping a man straight out of a dirigible. As for the surprisingly hands-on villains, I would watch an entire movie featuring Walken and Jones maniacally grinning their way through the phone book. The film falls flat when they’re not onscreen, and I’d desperately like to see a sequel: 2 Views 2 a Kill, an ’80s period piece where their characters take on Wall Street with extreme prejudice and doped-up horse-assassins.

Sensing the winds of change (or not), A View to a Kill ends with Bond peeking through the Iron Curtain three years before the actual fall of the Berlin Wall—awarded an Order of Lenin for doing the KGB’s dirty work while saving humanity. Well, actually it ends with the movie’s least believable scene: Bond and Bond Girl kissing as they steam out of view. Moore himself, 57 at the time, said he was “about 400 years too old for that part.” Best not to dwell on the image, and instead keep an eye peeled for Dolph Lundgren in his first film appearance as a KGB agent. —Danielle Burgos