Videograms of a Revolution 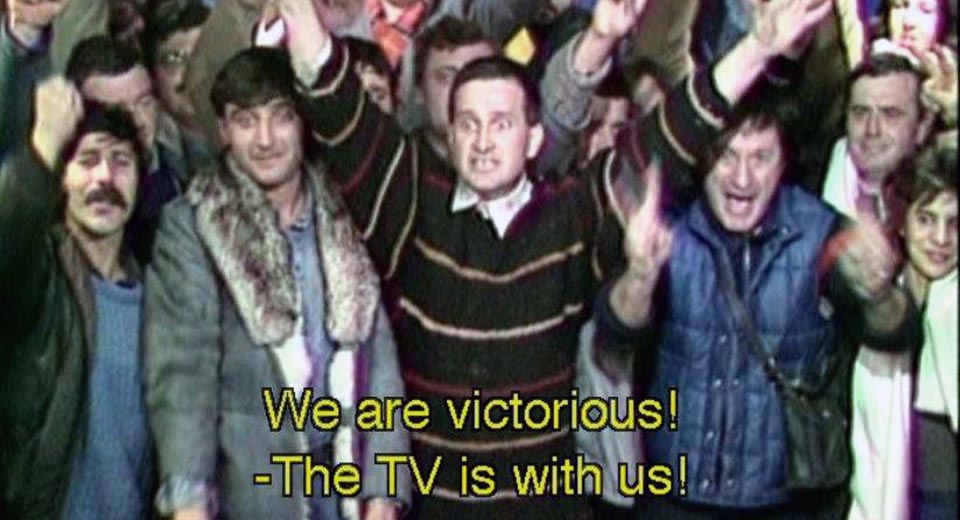 Today begins a comprehensive, four-month survey of the late German filmmaker Harun Farocki’s films and videos. Screenings will be held first at Anthology Film Archives, and then at 80 Washington Square East starting in June. A prolific filmmaker, Farocki produced over 100 films in four decades with an emphasis on essay-film and experimental documentary. Although Farocki’s work may be categorized as “political,” it is not only because it addresses political life. Rather, his films reflexively emphasize the significance of process as a matter of politics. If they are “political” films, so to say, it is partly because they are made politically. The camera, cameraperson, editor, sound, and image are all active and important players in the political drama that unfolds.

The series kicks off with Videograms of a Revolution (1992), a documentary made with Andrei Ujică about the fall of the Romanian dictator Nicolae Ceaușescu in 1989.

Videograms combines footage from amateurs and journalists with broadcasts from live television to reconstruct the events leading up to the collapse of Ceaușescu’s regime—from his last televised speech on December 21st, 1989, to his trial on December 26th. Ceaușescu had implemented an extreme austerity policy to aggressively pay back Romania’s debt. Many Romanians experienced pervasive poverty and shortages of food, heat, and electricity. An attempt to “save” on energy saw Ceaușescu take control of the regional media, reducing television broadcast to a single channel that played two-to-three hours a day, and often broadcast only propaganda.

The role media plays in recording and shaping historical events is a central and important theme to Videograms. During Ceaușescu’s speech, a “disturbance” occurs. A wave of screams is heard in the background, and the stationary television camera begins to violently shake. Intimations of an active shooting quickly become shouts about a potential earthquake, before all descends into chaos. The TV broadcast then indicates a “technical disturbance” and cuts off air. What caused this disturbance? Farocki and Ujică turn away from the national state televised narrative (which at this point is filming the sky to avoid recording an unexpected occurrence) and turn to other documentation to explain the interruption. They turn to an amateur cameraman first, who has filmed the television in his apartment, then panned to the streets outside. The television displays Ceaușescu as he continues his speech and attempts to maintain order; the streets display a mass of demonstrators.

Farocki and Ujică piece together a reflexive narrative, as the videocameras move from documenting to catalyzing protest. During the weeklong upheaval, the Romanian national television studio is hijacked and taken over by dissidents, who send out a live pirate broadcast announcing the victory of the Romanian people. The tool that had once been used for control is now being used for liberation.

The prevalence of documentation is no stranger to us today. Videos, images, snaps and tweets are uploaded as quickly as the media can decipher and decode what is actually happening. Videograms posits the inquiry: When our phones and cameras are pointed at a subject or an event, at what point are we just recording history and at what point are we constructing it?