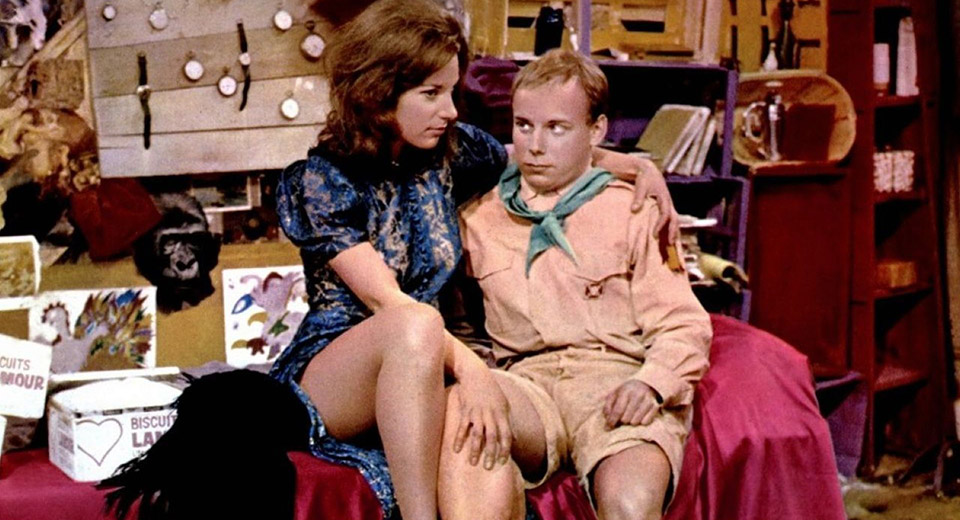 Radiating a defiant verve that feels modern, it’s hard to believe Nelly Kaplan’s A Curious Girl came out 50 years ago. An utterly satisfying anti-Cinderella story where the rags-to-riches transformation happens not through marriage and magic but via self-learned capitalist judo, the only clue it came out in 1969 is that its backwater French villagers would be more xenophobic in today’s far-right friendlier Europe.

After her mother’s killed in a hit-and-run no one seems keen to investigate, newly orphaned Marie (Bernadette Lafont) turns the leering abuse of her neighbors into leverage when she simply starts charging them for what they were already taking. Their petty, bureaucratic mindset keeps her relatively safe – they won’t run her off the land as it was legally given; calling on police and The Bishop would bring unwelcome attention, and after all, it is election season. Marie was held at such arm’s length she luckily lacks the townsfolks’ myopia. She’s not worldly (yet) – she junks a newly purchased phone after being told it requires electricity – but she’s clearly a quick study, acquiring a taste for fast fashion and reasserting market value when the town council tries price-fixing her services (with cameo by Louis Malle as the immigrant she plucks from the field to seduce, gratis, in front of them).

Some might be tempted towards an overly personal read of a first feature about an attractive firebrand operating on foreign turf; after all, Kaplan came to France from Argentina with $50 and not a word of the language. It’s not Kaplan’s life but her headspace onscreen – she and Marie share clear desire and contempt for anyone getting in their way, or as Kaplan put it, they’re witches who set others on fire without getting burnt. Accusations flit about that Marie’s beauty cast a spell, but her real power’s autonomy – wanting nothing, bound by nothing, she had nothing, so anything more is mere ornament.

Contrasting the drab, muddy village, Marie redecorates her space purely to please herself using bright, modern materials. One of the townsfolk remarks “it’s a waste” how she creates outdoor sculptures from whatever she doesn’t want, but they’re wasting entire lives mired in picayune tableaus, like the mayor stopping his wife after two ladlefuls of soup, only to yell at her not to go answer the door so she can ladle more soup out for him. Watching smug, parochial hicks impotently vent frustration on Marie’s cast-off junk as she walks down a sunny road, already having left it behind, is an electric delight. Quad Cinema screens a new 2K restoration all week as part of their larger series Wild Things: The Ferocious Films of Nelly Kaplan.