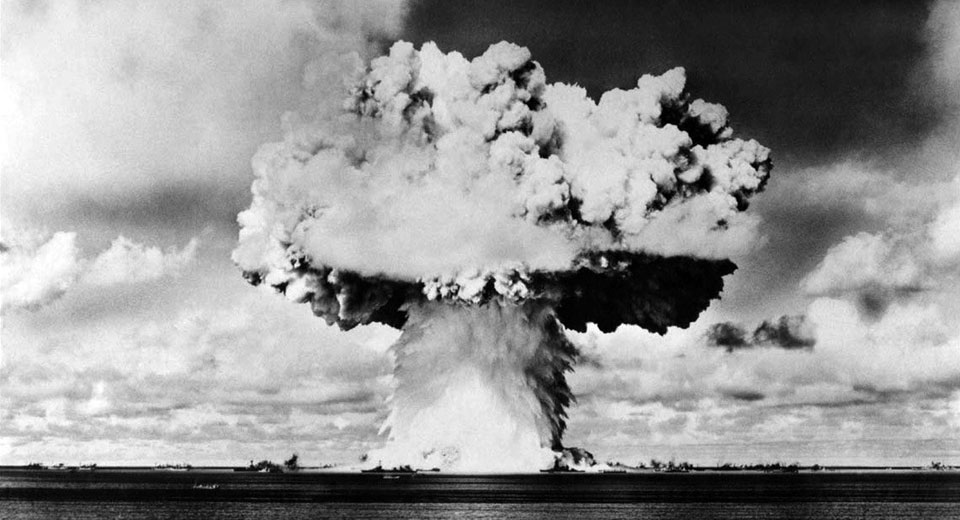 A weekend of kindred cinematic spirits to the new season of Twin Peaks concludes tonight at Metrograph with a shorts program called Operation Crossroads . Like “Gotta Light?”, the episode of Twin Peaks that gave this series its name, the theme is apocalypse—atomic, spatial, psychological, or some combination of the three. The arc of the program gradually melts conventional perception, almost physically rearranging your particles until you’re finally ripped apart. It’s a rougher, static-filled, blackout/whiteout take on a hyperspace sequence—or like being funneled through an outlet that somehow supports a wormhole between the Black Lodge, a tower overlooking an endless lavender sea, a Vegas condo, and a car radio.

The program begins in suburbia by way of a Woman in Trouble with Peter Tscherkassky’s Outer Space , if you’re going to read the program that way (why not)—in a nightmarish reworking of The Entity, Barbara Hershey anxiously trawls the darkened hallways of a small suburban home, where she’s beset by an invisible assailant. Apparition-like double exposures are soon replaced by overwhelming pile-ups of screeching static noise, as Tscherkassky creates a cinematic space that doesn’t just attack Hershey but mentally and physically consumes her. At first, the house she’s trapped inside seems to flicker into being, as though its visibility depends on the frequency to which your perception is tuned, much like Peaks’s more fantastical realms.

Cinematic rupture opens a portal to Ken Jacobs’s Bitemporal Vision: The Sea , strobing through fluttering patches of ocean waves that could almost suggest the cosmic microwave background (but no need to get too concrete). Afterwards, who but Peter Kubelka could jolt you out of Jacobs’s trance? The flickers of Arnulf Rainer reduce the viewing to elementals of light and darkness, with explosions of static that blank out everything but sensation. It’s an electrocution, and in Twin Peaks, such electrical currents have the potential to link disparate spaces, illuminate sights unseen, or quite literally burst into flames.

Instead of transforming you into a doppelganger at the end of it all, this program spits you out at Bruce Conner’s Crossroads after a brief interlude with his ’50s Americana Devo video. An assemblage of declassified footage of the Bikini Atoll nuclear tests, Crossroads transforms the blast into an inescapable, relived trauma. Each new angle is imbued with a sense of inevitability, while something about the scale of the explosion and the unsynchronized soundtrack foster a sense of mesmerizing unreality, a nightmare in which you’re fully awake.

It’s one thing to describe the shorts that comprise Operation Crossroads, but something else happens when they’re presented on a properly huge silver screen. So let go, and like the mantra from Twin Peaks has it, “Drink full and descend.”