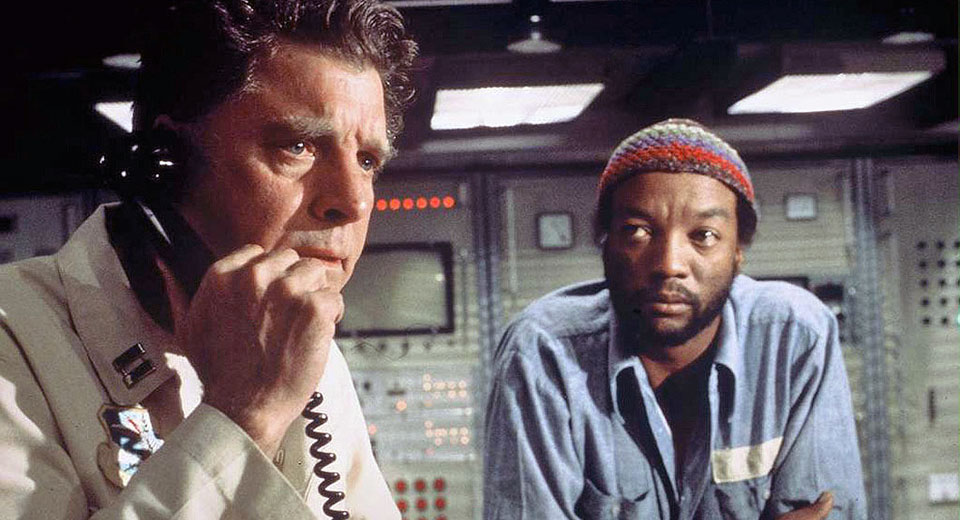 Robert Aldrich must have never seen 1964’s twin MAD-movies, Dr. Strangelove and Fail Safe, because his 1977 nail-biter Twilight’s Last Gleaming  might have felt a little redundant if he had. The scenario is straightforward: a former USAF General, Lawrence Dell (an autumnalBurt Lancaster), has slipped prison with fellow convicts Willis and Augie (Paul Winfield and Burt Young) and recruited them to help him hijack an SAC nuclear warhead silo. Having been a technical whiz before jail cut his career short (“Nobody in the Air Force knew our equipment better!”), he easily hacks the compound’s multi-layered security system (“I’ve disabled the cutoffs and inhibitors!”) and now has control over not one, not two, but nine Titan nuclear ICBMs to launch at Russia, unless US President David Stevens (Charles Durning) agrees to release the NSC’s top-secret Document 9759, which proves that the US started the Vietnam War with no other objective than to demonstrate to the Russians that it’s capable of “committing inhumane acts.” This show-em-how-tough-we-are posture is known as the Doctrine of Credibility, which Dell is convinced is the secret Truth behind the United States’ Cold War-era geopolitical strategy.

Searching for edge-of-your-seat suspense where there isn’t any, Aldrich has the base-jackers strip the central computer of a glass tube containing a highly volatile chemical that will blow them to pieces if its horizontal position is altered by as much as one degree. The scene goes on for so long that we forget what that fluid in the vial is again, and why they’re so afraid of it. As an anti-hacking device it’s so implausibly crude that only the high-strung Dell could take it seriously, and at this early point in the film it’s impossible to relate to the vaguely sketched characters. The movie has several virtues, but suspense isn’t one of them.

Dell is a classic Truther (“The problem is with the leadership; they don’t want to tell us the truth!”), and Lancaster’s gravelly voice is so sincere that it’s hard not to believe him. After Dell calls the White House about the classified doc, the prez digs it up, reads it, and is shocked (“Unbelievable! I’m reading it for the sixth time, and I still don’t believe it”). He is immediately converted to Dell’s camp; “The people must know, and dammit, they will know!” he puffs at his cabinet, who treat him like a child who’s just found out that Santa doesn’t exist. The Secretary of Defense (Melvyn Douglas) explains to him that this is what US foreign policy has been based on “through six different administrations,” that it really shouldn’t come as such a surprise. At this point we relate more to the cynical joint chiefs than anyone else, because it’s hard to believe that someone could climb the ranks as high as the president with such a naïve view of America’s military posture.

Dell’s ex-con partners aren’t Truthers themselves; all they care about is the $20 million ransom (“Fuck you and the flag, man! We’re not interested in any of that shit”). Some of the movie’s less ponderous moments spring from their repartee; when tying up one of the guards, Augie taunts him, “Like I used to say to the scabs in New Jersey: it’s a shame they have to go to the hospital without those union benefits.” The film is also a fascinating document of late 70s cutting-edge surveillance technology. The black-and-white security camera feeds are often split-screened with the other action, but often in ways that confuse rather than clarify the relationship between interior and exterior. Altogether, Twilight’s Last Gleaming is worthwhile for its moments of brilliance. At one point, Willis suggests that maybe the government is using midget soldiers to infiltrate the commandeered compound. Like a hurt child, Lancaster yells, “There are no midgets in the United States Air Force!” I laughed out loud. And the great Joseph Cotten and Richard Widmark, though agéd, are coldly sinister as machinating top brass.