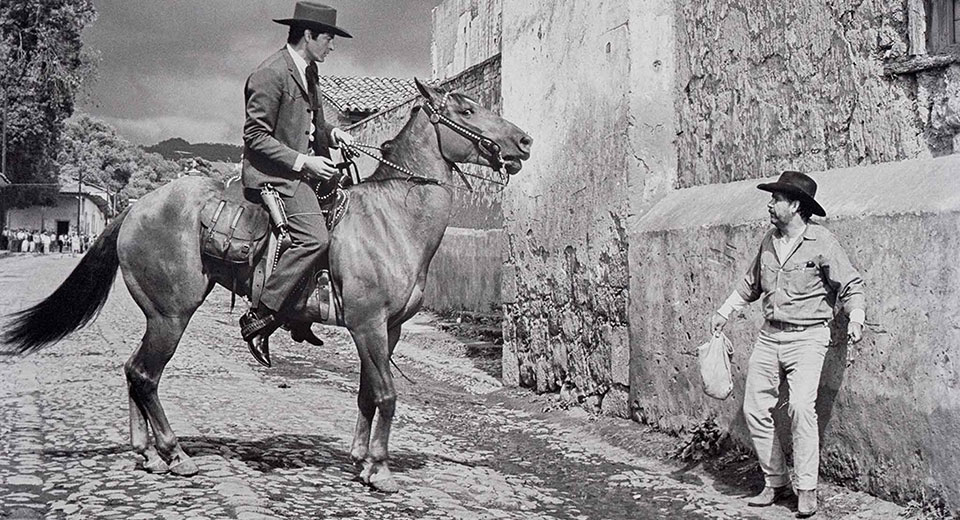 Arturo Ripstein's magnificent first film, the 1966 western Tiempo De Morir, is getting a US release (and a full run at Film Forum ) and it's about time. Quite literally. Clocks loudly tick , watches are checked and wound, time is savored, collapsed, discussed, and it is regained only to be lost again. In the film Juan Sayago (Jorge Martínez de Hoyos in an incredible performance) is released from prison after serving an 18 year sentence for murder. He arrives home to find his house in disrepair and the woman he loved married and widowed with a young son. He also encounters the sons of the man he killed, one he befriends while the other is hellbent on avenging his father’s death. What follows is a Robbe-Grillet-like western, where time gains a poetic dimension, circling back on itself, repeating, creating echoes of the past in the present. One of the murdered man’s sons dons the bullet hole-ridden vest his father was killed in as he seeks revenge. Sayago and the young man play out the same scenario of antagonism and violence that resulted in murder years before in counterpoint to narration describing the original events. Sayago also finds himself back in a cell, only now as a free (?) man. Time and events seem to drift freely, intermingling, reordering and reconfiguring like temporal molecules within an inescapable fatalistic framework.

Time and tempo are the warp and woof of Ripsetien’s film. The opening passage sets the deliberate, nearly Bressonian pace as the camera follows Sayago as he is released from jail. Slowly, moving step-by-step with the aging cowboy, the camera remains behind in a hyper-stylized, nearly slow motion deconstruction of John Ford’s iconic frame within a frame from 1956’s The Searchers. Ford’s image is inverted, the door frame opening onto to the limitless expanse of the west is replaced by a closing prison door, signaling a distinct philosophical difference between the films.

Tiempo De Morir’s haunting structure and meticulous dialogue is thanks to novelist Gabriel Garcia Marquez’s incredible script. The economy of language is powerful and filled with nuanced meaning. Again and again the “jail” and “the graveyard” are contrasted, two existential symbols that create the poles that frame the world of the film. The place of language and semiotics is potent and complex as well. The word “tiempo” derives from the Latin tempus as does the Italian “tempo.” Tempo transformed from its Latin root in the mid-18th century into a more specific term used to describe aspects of both music and fencing. This forking etymological road points to another aspect of Tiempo De Morir—what could have been. Juan Sayago quips that one of the murdered man’s sons could be his own, while he engages in a fencing match of sorts with the other, parrying, retreating and, finally, thrusting.

The tempo of Ripstein’s film, again, draws us back to an acute consciousness of time and how it works on the individual with maddening, unstoppable persistence. In Tiempo De Morir, the “jail” before “the graveyard” seems inescapable. There is something that can be done though, as Juan Sayago shows in scene after scene. He knits quietly, he winds a watch, he tills his land. His place in time is out of tempo with the rest of the world. The film seems to tells us that a person who has lost so much time, by some accounts, truly knows its value, and that the distinction between prisoner and freeman is in some senses a state of mind.