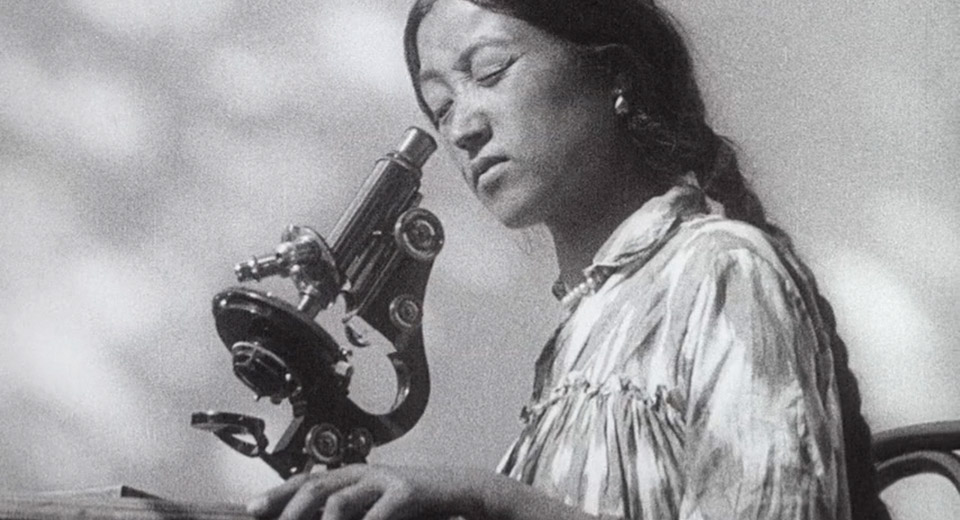 Despite a ceaselessly innovative career as the most prominent and influential documentary filmmaker of the early Soviet era, Dziga Vertov is today associated primarily with Man with a Movie Camera, his 1929 avant-garde experiment in cinematic reflexivity. That film has yet to be topped as an ecstatic demonstration of the vitality of cinema, yet until the 1980s, Vertov's reputation among film scholars rested largely on a later film, Vertov's second using sound, Three Songs About Lenin (1934). Conceived and executed to commemorate the 10th anniversary of V.I. Lenin's death, the film was enthusiastically received by contemporary critics, many of whom had denigrated Vertov's work throughout the 1920s as excessively formalistic and ideologically incoherent.

The film is divided into three distinct episodes, each structured around a "folk" song – artificially generated by Moscow, it turns out — extolling the importance of Lenin to the past, present and future of the Soviet Union as well as the tragedy of his passing. Throughout the film Vertov documents various military, legal and industrial victories won by Lenin and projects such progress into the Stalin era and beyond.

With this film, Vertov approaches figurative characterization in his portrayal of a young woman who heeds Lenin's call to disavow herself of the suffocating influence of Islam—a transition emblematized by the face-covering veil which is cast off several times in the film's opening minutes. Within the film's broader celebration of Lenin's pervasive influence, the cultural emergence of Central Asian women becomes something of a psychologized narrative through-line. Within this subplot of female emancipation, one individual woman's journey is given ample screen time and is presented as an evolving narrative. Though her characterization is minor compared with those of most narrative films before or since, she is, in this regard, a unique figure in Vertov's work. As Yale film scholar John MacKay argues, the nameless woman is "the closest thing to a 'character' to be found in any major Vertov film."

Soviet critics of the day read Vertov's soft skew toward canned drama in Three Songs as a humanist counterpoint to the perceived soullessness of his previous works, which were dedicated to programmatic explorations of economic modernization and political abstractions. Myopically or disingenuously, the party faithful found more humanity in Three Songs's hagiography and Hollywood-inflected characterization than in Man with the Movie Camera's vital portrait of "life caught unawares." The misapprehension has been corrected by recent generations of film scholars and perceptive audiences. That's not to say that Three Songs has little to offer contemporary viewers, however. Three Songs About Lenin remains a fascinating and often invigorating demonstration of an artist forsaken by his times, trying valiantly to square a collective past with the demands of a forecasted future.