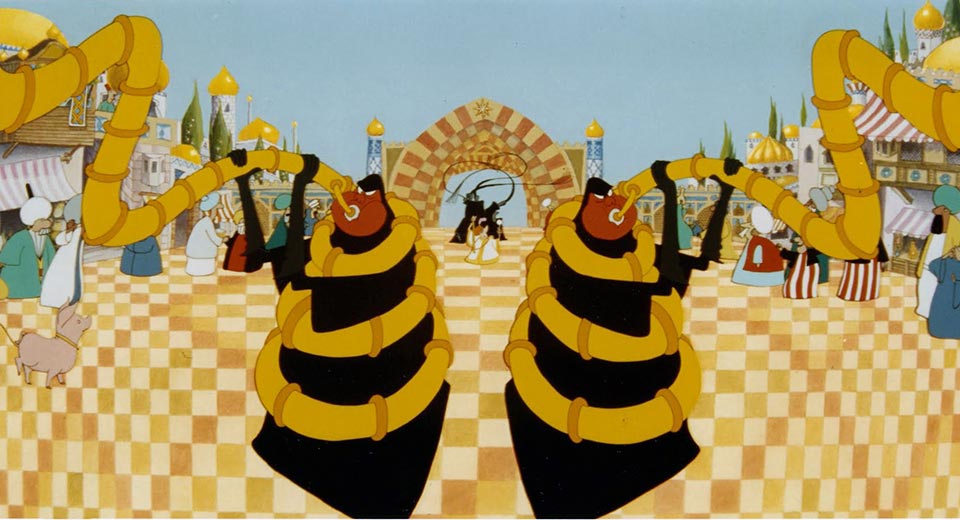 When Richard Williams began working on The Thief and the Cobbler in 1964, he intended to make the greatest animated film ever. Today, Thief's tumultuous 28-year creation is the stuff of legend. Inspired by Sufism and Persian illustrations, Williams painstakingly blended the geometric patterns of Eastern art with Western cartooning to tell the fable of a Middle Eastern city protected from destruction by three gold orbs kept atop its highest minaret. When the titular thief steals the orbs, one-eyed monsters threaten to destroy the kingdom if not first stopped by "the simplest soul with the smallest and simplest of things."

Williams became obsessed with Thief, pouring thousands of dollars of his own money into it and bringing on the best animators: Art Babbitt, Emery Hawkins, Grim Natwick. After Williams earned an Oscar as the animation director for Who Framed Roger Rabbit (1988), Warner Bros. picked up Thief. But as it turns out, making the greatest animated film ever isn't easy; deadlines and budgets were overshot. Plus, there were rumblings of a Disney feature in the works that would threaten The Thief and The Cobbler's release — 1992's Aladdin. It didn't escape Warner Bros. notice that Aladdin's villain looked alarmingly similar to Thief's.

Although Williams was nearly finished with the film, Warner Bros. smelled trouble and backed out, legally handing the project over to the Completion Bond Company. With Fred Calvert placed at the helm, the result, significantly tweaked and re-titled The Princess and the Cobbler, flopped. Miramax then bought the rights and butchered the footage further, creating a Frankenstein's monster entitled Arabian Knight .

All was not lost: there was the 35mm workprint itself, the cut Williams had on May 13, 1992, the last day Thief's production was in his hands. A decade later, Williams restored it; that version is now mid-run in its New York City premiere at the Museum of Modern Art .

The Thief and the Cobbler is a monument of perfectionism, from the hand-painted details of cards fanned by the Grand Vizier to the galloping, seesawing, Rube Goldberg-like workings in the famous war machine sequence. “I do think there's a bit of [ego] in there," filmmaker Kevin Schreck says of Williams in Persistence of Vision (2012), his documentary on the film's debacle. “But I think a lot of it was a love of the art of animation and being a perfectionist in the truest sense of the term, too."