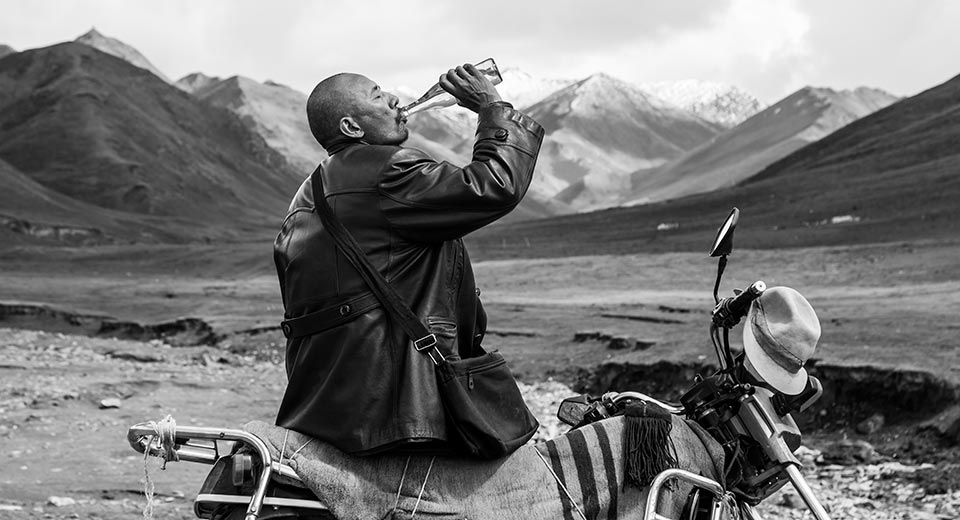 Pema Tseden's films are typically introduced with the fact that he is the first, greatest, and most widely recognized Tibetan filmmaker. He deserves the distinction, but his de facto position as the singular cinematic voice of a region and a people, whose recent history is defined by a kind of aggressive cultural repression, means that the simple act of his making a film becomes a political statement; which, for an artist, can become its own form of censorship. In practice this means that Tseden's films are usually treated as marginal curiosities, obscuring the fact that his subtle, unapologetically humanist stories about contemporary life on the Tibetan plateau deserve a far wider audience than they have ever received. Luckily, his newest feature Tharlo has a week-long run at the Museum of Modern Art, offering the city a chance at an introduction to a filmmaker who has so far been overlooked.

The film follows the story of a man, a shepherd named Tharlo, who, when we first see him, has come into the city from his isolated house in the mountains to apply for a national identity card. Sitting across a long desk from the chief of the local police station, Tharlo is asked a series of questions—name: Ponytail, real name: Tharlo, age: unknown—and immediately we sense the separation between the two men. It is easy to read this as an obvious metaphor (and to foist this onto the entire film): Tharlo is the past, a shepherd, representative of the old, mystical Tibet; while the police chief embodies the bureaucratic and sterile future. But, as we subsequently watch as Tharlo leaves the police station, meets a beautiful hairdresser, and faces the possibility of throwing away everything that constitutes his way of life, it becomes obvious that Tseden is not interested in simple, superficial metaphors. He is a moralist, and what seems to interest him most is the idea that the process of modernity and 'modernization' is always at its heart a question of purity and temptation. Which makes the bleakness of the film's ending an even more despairing statement on the fate of a man's life.