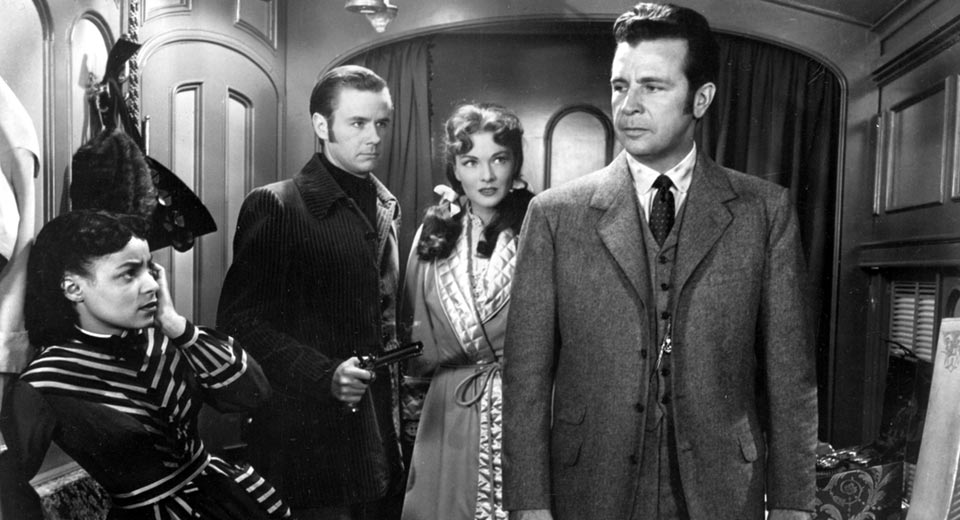 Anthony Mann’s The Tall Target (1951) boasts the preposterous gimmick of setting a noir thriller in the 19th century. Gone are the fedoras, whitewall tires and semi-automatics, but the stark atmospherics and wry detectives remain. Mann was responsible for the genre’s darkest visions, in which oceans of deep black smother hapless lowlifes when they’re not being scalded by white-hot lamps swinging in dank rooms. Surprisingly, the antebellum period proves to be fertile ground for Mann’s fatalistic grind, due as much to the air of social disarray as to the scarcity of artificial light.

Dick Powell stars as John Kennedy, a New York cop whose chance encounter with a Southern malcontent unveils a conspiracy to assassinate president-elect Abraham Lincoln. Ridiculed by colleagues and dismissed by superiors who would shed no tears for a supposed warmonger, Kennedy relinquishes his badge and boards a train to Baltimore to foil the plot. The animosity toward Lincoln is such that nearly everyone on board is a suspect. Even Kennedy hastens to distance himself from Republican politics, claiming his adamance stems not from abolitionist sympathies, but an admiration of Lincoln the man, who acted kindly toward Kennedy when the latter was briefly assigned to the then-candidate’s security detail. Kennedy investigates alongside Adolphe Menjou’s militiaman, a law-and-order stalwart willing to set aside his own grievances against the new president. The ensuing action crystallizes the conjoined thrills of rail travel and cinema: tight spaces, strange encounters, perpetual motion.

True to form, Mann captures the desperation of physical violence in his brutal staging, and sketches psychosexual intrigue in the margins of his story. As he had in his cycle of noirs in the 1940s and as he would in the Westerns that would occupy him for most of the 1950s, he belabors fisticuffs beyond the rush of excitement, reducing all balletic quality and entrenching the action in the throes of survival. Mann’s approach to sexuality throughout his career had a similarly desperate quality. Here, Ruby Dee delivers a brief but stirring performance as Rachel, the only slave aboard the train. She serves a Southern belle whose brother is ready to enlist in the Confederate army. Lincoln’s sole advocate on board is an abolitionist busybody who condescendingly explains the meaning of freedom to Rachel, whose internal struggle pits an implied romantic history with her female owner against a hope for emancipation. Like Kennedy and the rest of Mann’s forsaken characters, she’s ensnared by an ugly fate with just enough leeway to make a bit of noise.